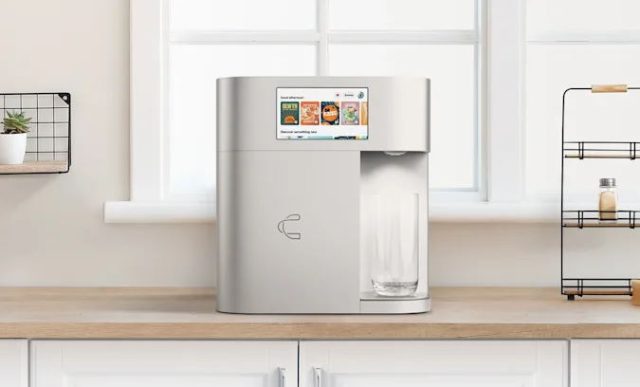 One of the most memorable moments in the famous Star Trek series is when Captain Jean-Luc Picard uses voice control to get his favorite tea, from a synthesizer that can reproduce almost any drink ever invented.

Claiming that he recreated this invention in the real world, a startup with a suggestive name, Cana, unveils the first “molecular beverage printer”, a device that works rather on the principle of inkjet printers, using a cartridge lined with many precursor chemicals. , which, if mixed according to the right recipe, end up recreating various commercially available beverages, such as juices, various coffee varieties, selected flavored wines and cocktails.

The device, Cana One, takes the form of an espresso machine only good for sitting on the kitchen table. It’s just that instead of coffee, the main consumable is a flavored cartridge that you order directly from the equipment manufacturer. Once installed, all you have to do is choose the drink you want from the touch screen. You can even adjust essential parameters such as alcohol, caffeine and sugar concentration. And so that the almost unlimited supply of drinks does not tempt family members too much, you can also set a PIN code to block access to dishes that also include alcohol or caffeine.

According to the team of researchers who claim to have spent at least three years investigating “at the molecular level” the most popular beverages, their recipes have been isolated to the level of constituent chemicals, facilitating their recreation at the touch of a button.

Thus, the system uses a “new technology for distributing microfluidic liquids” to mix drinks. Manufacturer Cana says that more than 90 percent of what we drink is actually flavored water, added sugar and alcohol. So why not get the same result with less money, recreating that drink without going through all the steps that normally precede getting that product, in “natural ways”. Cana also says it can reduce the waste of water needed to grow ingredients for things like orange juice and wine.

Read:  Material You experience, inevitable for buyers of Android 12 phones

The cup will automatically replace the ingredient cartridges (which should last about a month each) as needed at no cost. However, you will pay for the beverage-based device preparations. Each will cost between 29 cents and $ 3, although Cana claims that the average price will be lower than for bottled beverages at retailers. The system also requires sugar cartridges and spirits – both of which are automatically replaced – and a CO2 cylinder.

The price of a copy of Cana One is $ 499 during the promotional campaign ($ 99 payable immediately upon placing the pre-order), rising to $ 799 after the first 10,000 units sold. Deliveries are expected to begin in the first half of 2023.