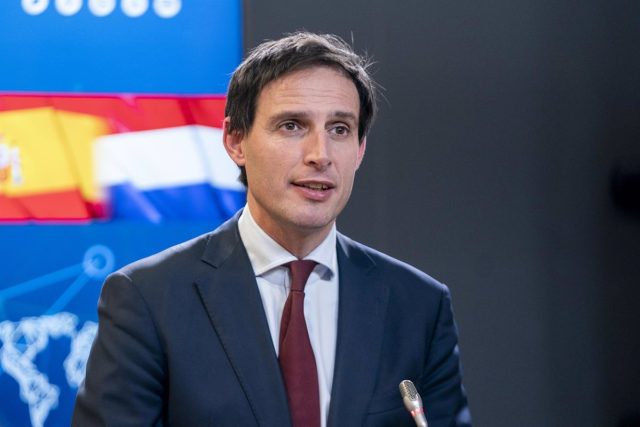 He is accompanied by his German counterpart, who is visiting Ukraine after diplomatic tensions

The Dutch Foreign Minister, Wopke Hoekstra, reopened the Dutch Embassy in Ukraine on Tuesday during a surprise visit to the capital, kyiv, in the framework of which he plans to meet with the president, Volodimir Zelensky.

The Dutch authorities reported at the end of April that their embassy in kyiv had resumed operations, despite the fact that clashes with the Russian Army continue.

According to information collected by the Dutch newspaper ‘Algemeen Dagblad’, Hoekstra, the Dutch prime minister who has traveled to Ukraine since the war began, traveled to Poland on Monday night, from where he traveled to kyiv. He will return to the Netherlands tonight.

Hoekstra, together with her German counterpart, Annalena Baerbock, has visited Irpin, an area of ​​​​Ukraine with intense fighting. “The dramatic devastation is a testimony to the impact that the war has had on the lives of the men, women and children who live here,” she lamented, before assuring that “this cannot go unpunished.” “The Netherlands is committed to the search for truth and justice”, she has riveted through her account on the social network Twitter.

In addition, he has been seen with his Ukrainian counterpart, Dimitro Kuleba. “After many phone calls, it is good to give Dimitro Kuleba a squeeze”, the Dutch minister welcomed, indicating that his presence in kyiv is “important”, in which he has witnessed the “enormous impact of the aggression Russian to Ukrainian citizenship”. “We will continue to support Ukraine with military, humanitarian and financial aid,” he assured on the aforementioned social network.

Dutch Prime Minister Mark Rutte will address the Ukrainian parliament on Thursday via telematics. He was invited by Zelensky, who addressed the country’s Congress in March.

Baerbock has visited Ukraine after the diplomatic tensions between Berlin and kyiv on account of the collusion with Russia of the German president, Frank-Walter Steinmeier. The German and Ukrainian presidents “clarified” their differences on Friday.

Steinmeier intended to travel to the Ukrainian capital, kyiv, in the framework of the Russian invasion of Ukraine, but the Ukrainian authorities refused as a gesture of discomfort for his alleged collusion with Russian politics for years, also during his time as foreign minister.

Baerbock has visited Bucha, where she has declared herself “shocked” and has promised Germany’s help in investigating alleged Russian war crimes. “We will do it as an international community (…) we owe it to the victims,” ​​she said, according to the newspaper ‘Frankfurter Allgemeine Zeitung’.

THE “INACCEPTABLE” DELAY IN THE APPROVAL OF MORE SANCTIONS

In a joint press conference with Hoekstra, Kuleba called the delay in the adoption of the EU’s sixth package of sanctions against Russia “unacceptable”, while considering all the arguments against the introduction of the veto to be “exaggerated”. to Russian oil.

“All arguments that the oil embargo in the form in which its adoption has been proposed will destroy the economy of Hungary or any other country are farfetched, because the EU has proposed a flexible mechanism for imposing an oil embargo that takes into account the interests of all member countries,” he said, according to the Ukrainian news agency Ukrinform.

He has stressed that kyiv “has high hopes” that a solution can be found in the coming days. “If it is not found we will have to conclude that Hungary, with its uncompromising position, is simply playing into Russia’s hands in its efforts to preserve the EU oil market,” she said.

In addition, he has assured that he does not have “great expectations” of the next informal meeting of NATO foreign ministers because Ukraine “has not seen a strong position of the Alliance as an organization” since the beginning of the war.

In this sense, he specified that he had not yet received an invitation to the informal summit, but that he would attend if he did. According to her, the future of Europe and the Euro-Atlantic space are decided on the Ukrainian fronts.