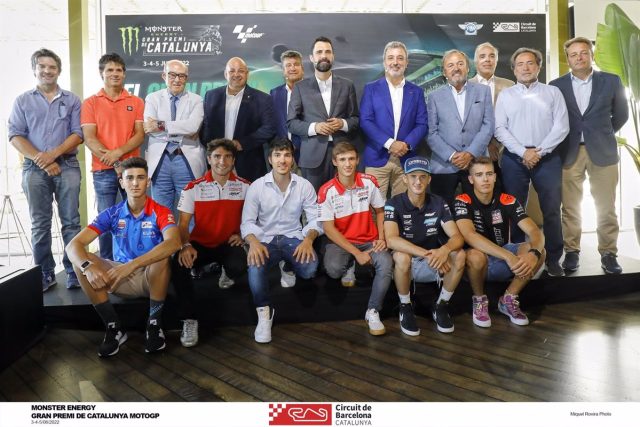 Roger Torrent: “This year will be the Grand Prix of reunion, with good weather, even too much”

Jaume Collboni: “Barcelona would not be understood without motorcycles”

The Circuit de Barcelona-Catalunya will host the 2022 MotoGP Grand Prix of Catalonia for the 31st time, the ninth round of the season, with an abundant participation of ‘home’ riders in the three World Championship categories, and with additional measures to combat the high temperatures.

The organization hopes to meet again with the public and the good weather, so they promise to “take care” of the fans. In this sense, they have increased the distribution of points of sale for water and soft drinks to avoid queues, after complaints from fans who attended the Spanish Formula 1 Grand Prix.

“Fifteen days after hosting the Formula 1 Grand Prix, MotoGP arrives. It is the race for many home riders. The championship is very lively. For the first time, Aleix Espargaró could take the lead. We are waiting for Marc Márquez, we want the next year be with us”, assured the general director of the Circuit de Barcelona-Catalunya, Josep Lluís Santamaría, at the presentation of the Grand Prix in the port of Barcelona.

Read:  Alex Rins and Aleix Espargaró seek leadership in MotoGP in the heat of the Jerez fans

For his part, the Minister of Business and Work of the Government and president of the Circuit de Barcelona-Catalunya, Roger Torrent, hopes that the Circuit will be “a springboard for the leap that the mobility industry has to make in the coming years”. For this reason, they work to recover the weight of the industry “with the parameters of the 21st century”, and expect a transformation “in the medium term” to make it the most sustainable in the championship.

“This weekend all the ingredients are in place for it to be a great party. This year will be the Grand Prix of reunion, with good weather, even too much. We are missing Marc Márquez, but there will be emotion, in the three races. The championship is very even and it goes very little, it will be a race for those who make fans. Let’s hope that the victory comes in the last corner, “he added.

The Grand Prix was presented this afternoon in one of the most emblematic places in Barcelona, ​​Port Vell; a location very close to the Village Barcelona & Circuit, which closed its doors today after six days with the best atmosphere in the MotoGP universe.

The organization has highlighted a pillar of the Circuit’s philosophy. “We want to reduce CO2 emissions, we work with renewable energies, electric vehicles and we try to minimize waste”, explained the general director.

Read:  Sergio González: "This victory has to be gasoline for us"

In the case of Jaume Collboni, the first deputy mayor of Barcelona, ​​he highlighted the importance of two-wheeled vehicles in the Catalan territory. “We are the city in Europe with the most motorcycles and we are a city with linked industry. Barcelona would not be understood without motorcycles”, he stated.

The act has also had the presence of the protagonists of the weekend; like the pilot Maverick Viñales, Albert Arenas, Jeremy Alcoba, Sergio García and Xavier Artigas; and among other motorcycling legends such as Àlex Crivillé, Sito Pons, Emilio Alzamora and Carlos Checa.

Barcelona will live the emotion on two wheels, but with the great absence of Marc Márquez. In the case of Emilio Alzamora, his manager, he spoke about the status of the eighth world champion, who will be operated on for the fourth time. “This Thursday Marc starts another great career. The important thing is not the deadlines, but that the operation goes well. He has suffered a lot since then because the rotation of the humerus is much higher than what he expected”, he commented.