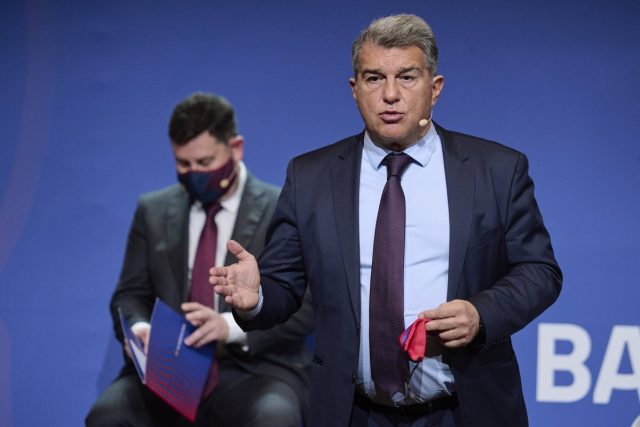 Laporta sees “unfair conduct” and possible “unjust enrichment” in the previous Board of Bartomeu: “It is an allegation of incontestable facts.”

The economic damage to the club would be “tens of millions” and the possible crimes of unfair administration, misappropriation and false accounting.

The president of FC Barcelona, ​​Joan Laporta, assured in the presentation of the ‘Forensic’ report on the financial situation of the club that the previous Board of Directors chaired by Josep Maria Bartomeu made payments “without cause, false cause or disproportionate” involving five facts “incontestable” on which they have based their complaint to the Prosecutor’s Office.

The club commissioned a ‘Due Diligence’ to Deloitte that detected a series of “doubtful actions” placed in the hands of the Kroll agency, which found a series of “five concrete facts” which, in the club’s opinion, could constitute possible crimes of unfair administration, misappropriation and false accounting in addition to economic damage of more than 30 million euros.

“All this evidenced disloyal conduct towards the club’s assets, and they did not rule out (auditing companies) that there was unfair enrichment of the material authors of those payments. What we did was bring it to the attention of the Barcelona Public Prosecutor’s Office, which watches over the principle of legality and urges the prosecution of possibly criminal conduct. We made a complaint of incontestable facts“, assured Laporta at a press conference in the Auditori 1899, with almost two hours of appearance.

In this sense, the president assured that the club makes itself available to the Prosecutor’s Office to facilitate the investigation and whatever is necessary to provide evidence. “The members have the right to know the actions that put the club in a situation of ruin, and we as directors do not want to be complicit in those actions that led the club to a very delicate situation”, Laporta was sincere.

He also assured that it is not a case against anyone. “The prosecution will determine guilty. We are here to clarify the facts and we are not pointing fingers at anyone, we are not policemen or judges. The Prosecutor’s Office will designate the authors of these acts. Our obligation was to inform the partners of all these actions. We believe that we had to act like this for the benefit of the club”he explained.

Read:  Platini's lawyer believes that the trial against the former UEFA president is "the result of a conspiracy"

They detected a ‘modus operandi’ to avoid interim controls of the club and avoid statutory controls. “I find the sports contracts, the sports wage bill, bloody, because they had to be aware that it was skyrocketing and that it would be very difficult to compete in the medium and long term. There were continuous performances of this way of operating, which is strange. And then there are specific events of payments and commissions in the millions, insurance outside the market, which are difficult to justify”, highlighted Laporta about the ‘malpractice’ found in the previous Board.

He wanted to clarify, yes, that “never” He said that the previous directors enriched themselves personally. “I say that the ‘Forensic’ does not rule out that they have done it, the authors of these behaviors. Reach into the box? What I think is irrelevant, it will be the Prosecutor’s Office that will determine whether or not there has been”, he reiterated.

THE FIVE EVENTS WITH CRIMINAL SIGNS

It was the criminal lawyer specialized in economic law and doctor in procedural law Jaume Campaner who exposed the facts, who broke down –as far as he could, so as not to interfere in the investigation by the Prosecutor’s Office– those five facts with criminal indications that, without being able to say final figure, would have cost the club more than 30 million euros in damage, or “tens of millions” for the president.

“It is about transferring to the competent authority a series of very serious criminal behaviors that we can consider rude, grotesque and that, in any case, are not supported from a legal or economic point of view. And the club does it by accompanying evidence and objective data, it is not a naked complaint. If I had to define what is denounced, it is disloyalty towards a club’s heritage”Campaner summed up.

For the lawyer, there is a first block of conduct consisting of the remuneration of intermediaries. “Commissions are usually around 5% and commissions of 33% have been detected. There is a company that was born only to invoice FC Barcelona. 10 million commission was paid after the transfer was closed. All this caused a very high fiscal risk that had to be regularized recently. 3 million euros were paid to the Treasury to protect their interests”he explained.

“There is a second block with payments without justification: first, almost two million euros, then half a million euros for a contract, plus another seven million for brokering a transfer. These two blocks fit into the disloyal administration and misappropriation”, contributed.

And there is a third block that he summarized as accounting alteration. “There was a deliberate distortion with the player swap. Player market prices were greatly inflated. The sale is counted as income in the same year in which it occurs and the club has financial muscle. However, the cost is an expense that is amortized over several years and is diluted”, pointed out, without giving names, to the possible exchanges between Arthur and Pjanic or between Cillessen and Neto.

“The result is artificial accounting profits that do not correspond to the image of the club. That is a crime of false accounting. The club has an obligation to put these facts on the table. The next element is the payment of compensation of 1.5 million euros so that there would be no allegations in the ‘Espai Barça’ metropolitan plan. The causes of the contracts were simulated. Money was allocated for a cause that was not what they said”, denounced.

And, in the highest amount of those provided, the following: “15 million were paid to a club for a simulation of a right of first refusal, which has nothing to do with reality. The simulation is the cause of the contract. The real reason for the payment is the non-presentation of evidence before the Federation, but a score of young players from another club is put. The truth is not told and you pay for something that will have to be determined if it is lawful or not”. Obviously, he did not give names although he did not deny a question that pointed to Atlético de Madrid and the Griezmann case.