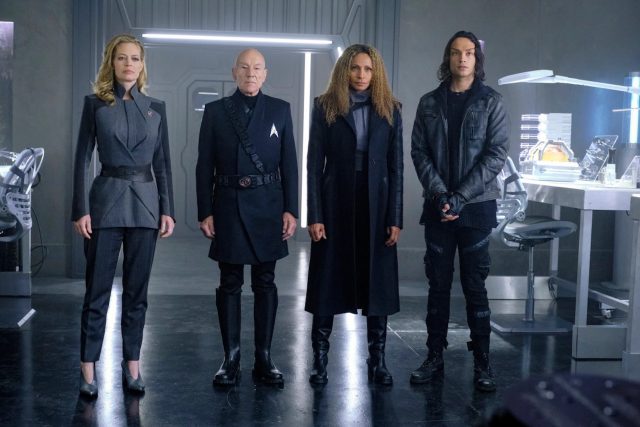 “Star Trek: Picard” is the gift that any fan of the Trek franchise deserves, following many recent performances, more or less close to what Gene Roddenberry originally thought.

Although “Star Trek: Picard” is not exactly made in the spirit of the famous tales of the Star Trek universe, it can be said that, by and large, it is the production that comes closest to what I knew and loved, 20-30 years ago.

Although the series in which we can see (now) Admiral Jean Luc Picard does not excel in the script chapter, it still benefits from a quality that all other recent performances do not have: nostalgia.

Why “Star Trek: Picard” is aimed at a particular audience

“Star Trek: Picard” resorted to a little trick: bringing back to the forefront some characters from Star Trek, extremely loved by the public. So, if at first I could see William Riker, Deanna Troi or Data, in the most recent season Guinan (played by Whoopi Goldberg), Q (played by John de Lancie) or Seven of Nine (played by Jeri Ryan). The Borg Queen, the main pawn in the action, also reappears in the last season.

At this moment, the new series that revolves around the recent adventures of Jean Luc Picard, is in full swing, with real chances to bring new and new surprises to those who watch it, until the end.

Read:  Spotify a new decision on Joe Rogan: what the music platform did

Obviously, the series is a consolation for the fans who watched the long-running Star Trek series head-to-head, so there is a possibility that it may not be appreciated by the newer generations, unfamiliar with “Star Trek: Next Generation”. Star Trek: Voyager ”or“ Star Trek: Deep Space Nine ”.

If you’ve come across “Picard” by chance and want to better understand all the “Easter Eggs” in the movie, it might be a good idea to take a look at Netflix to get started with older series, referred to in the previous paragraph.