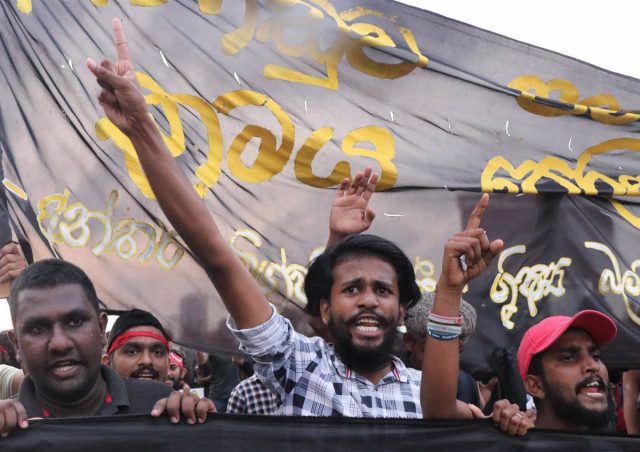 The movement claims the post of the prime minister, Ranil Wickremesinghe.

Thousands of people have seized this Saturday the residence of the Sri Lankan president, Gotabaya Rajapaksa, in the explosion of a popular revolution that culminates months of protests against the authorities for the devastating economic crisis that plagues the nation, the most serious since the declaration of its independence from the United Kingdom in 1948.

The streets of the country’s capital, Colombo, are right now crowded with hundreds of thousands of people who have joined the massive rally that began early this morning, led by the Buddhist monks of the country and seconded by civil associations, artists, teachers, writers and other professionals, amid skirmishes with the police, now calm after repelling the first attempts to raid with gunshots in the air and tear gas.

Medical reports estimate at least 33 injured, two critically, among them two policemen, due to the violence unleashed hours before the incursion, when the Police had to intervene with gunshots in the air and tear gas to prevent the demonstrators from taking the barracks near the residence, on Chatham Street. After taking over the presidential residence, another group of demonstrators entered the President’s offices in the capital and a third concentration is just outside the gates of the country’s Central Bank.

The country’s president is now at an unknown location but sources close to the president assure that he will respect the decision taken by the country’s prime minister and former rival, Ranil Wickremesinghe, and the leaders of the political parties close to the president in the emergency meeting that has already begun. The country’s main opposition, the United People’s Power (SJB), which does not recognize the Prime Minister, has warned that it will not participate in the meeting and demanded the resignation of both the President and the head of the Government.

Wickremesinghe has finally announced his resignation as prime minister of the country “to ensure the continuation of the government, including the safety of all citizens” and make way for a concentration executive. The President’s decision is still unknown.

SJB is not alone in its demands. The Sri Lanka Bar Association, one of the country’s most prominent civil organizations, has called on the president to begin considering resignation. The association’s executive committee is also demanding that the country’s outgoing prime minister and his Council of Ministers and Parliament take immediate action to ensure political stability in the country.

Also the pro-reformist group Podujana Peramuna has called on the president to resign immediately, given the current situation in the country. The statement, also picked up by News First, calls for the formation of the aforementioned “concentration government, with the participation of all members of Parliament, under a suitable prime minister.”

Sri Lanka’s protests began in early March amid an economic crisis the likes of which the country has never known in its history, marked by unaffordable fuel price hikes, lack of access to basic necessities, power cuts, record levels of inflation — which could reach a 70 percent year-on-year rise in the coming months — and an accumulated foreign debt of nearly 50 billion euros.

The Sri Lankan authorities have been criticized by international organizations for the excessive harshness used to repress demonstrations that have left at least a dozen civilians dead, more than 200 injured and more than 600 arrested.

The population has ended up blaming the Rajapaksa clan for making decisions that have led to severe shortages of everything from fuel to medicines, inflation close to 55 percent — with a forecast of 70 percent in the coming months –, daily blackouts of up to 13 hours, a historic default on debt and the impossibility of accessing gasoline or diesel.

In an attempt to contain the protests, the president pressured his brother and prime minister, Mahinda Rajapaksa, to resign from office along with the rest of his government. In his place emerged Wickremesinghe, another old hand in Sri Lankan politics, who had already held the same post on up to four occasions and who is seen by the opposition, despite his previous frictions with the president, as an absolutely continuist option.

In fact, earlier this month, Sri Lanka became the first country in the world to restrict the sale of fuel to the citizenry since the oil crisis of the 1970s through a decree in which private vehicle owners are banned from using gas stations until July 10.

The nation also needs some $6 billion in aid from the International Monetary Fund (IMF) and countries such as India and China to get by over the next six months, according to the prime minister. Local authorities have spent the past few weeks accelerating bailout talks with the IMF and other agencies to obtain other new sources of funding.

The prime minister spent the last few months encouraging talks with the IMF to secure the bailout loan while President Rajapaksa has negotiated with China to begin a process to restructure the repayment of the debt his country has incurred to the Asian giant due to the impact of the coronavirus crisis.

It should be recalled that prior to this crisis, Sri Lanka had for years been benefiting from billions of dollars from China in the form of loans; a program that has exploded in the form of the current foreign exchange crisis.

Critics use Sri Lanka as an example of the “debt trap” to which China is subjecting several countries around the world, especially African countries, forced according to them to make exaggerated trade or diplomatic concessions to delay repayments. Chinese Foreign Minister Wang Yi responded to these criticisms, which he described as a “narrative” driven by “those who do not want to see these countries lift themselves out of poverty”.