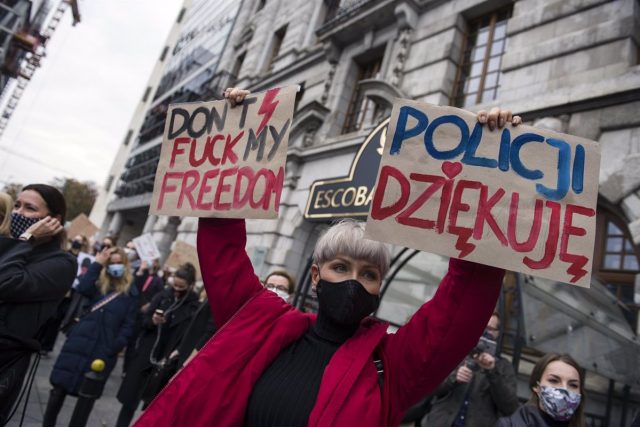 The NGO Human Right Watch (HRW) has demanded Wednesday that the Polish Ministry of Justice drop charges against abortion rights activist Justyna Wydrzynska, who has been accused of having collaborated to facilitate an abortion for a woman who was in an abusive relationship.

In what is believed to be the first known prosecution in Europe of an abortion activist for allegedly providing abortion pills, the organization has called on the Polish judiciary to stop “attacking reproductive rights advocates,” starting with dropping the charges against the activist.

“Bringing to trial a women’s rights activist accused of helping a victim of domestic violence shows just how far the Polish government will go in its crusade to prevent women and girls from exercising their reproductive rights,” HRW women’s rights researcher Hillary Margolis said in a statement.

Margolis argued that “anyone” could face prosecution, and stressed that “no one should risk being charged with a crime for helping women obtain essential medical care.”

The first hearing dated April 8 was postponed because key prosecution witnesses failed to appear. This included the husband of the domestic violence survivor, who had informed the Police of his wife’s intention to terminate her pregnancy, the NGO has detailed.

Read:  FBI concludes that Alec Baldwin pulled the trigger on the gun that killed a woman at a shooting

The pregnant woman had allegedly contacted Wydrzynska in the early 2020s saying that she could not travel outside Poland for an abortion due to her husband’s controlling and abusive behavior, which ultimately led the activist to provide her with unauthorized medication.

At the April 8 hearing, representatives of human rights groups were barred from the courtroom. Instead, the judge allowed the ultra-conservative organization Ordo Iuris to join the prosecution as a “social interest party” to defend the alleged rights of the fetus.

In October 2020, Poland’s Constitutional Tribunal ruled that abortion for “severe and irreversible fetal defect or incurable disease threatening the life of the fetus” is unconstitutional, virtually eliminating legal abortion in the country.

Prior to this ruling, more than 90 percent of the approximately 1,000 legal abortions performed annually in Poland were on this ground, according to HRW. Instead, abortion is now only permitted to safeguard a woman’s life or health or if the pregnancy is the result of a crime, such as rape or incest.

Read:  Lula is confident that the support of Gomes and Tebet will give him the victory with more advantage than in first round

The NGO has recalled that, according to the World Health Organization (WHO), medical abortion is a safe, non-invasive method that can be self-managed up to the twelfth week of pregnancy. The drugs recommended for medical abortion are included in the WHO list of essential medicines.

Moreover, HRW has asserted that “evidence consistently demonstrates that laws restricting or criminalizing abortion do not eliminate abortion , but rather drive people to seek abortion through means that may put their mental and physical health at risk and diminish their autonomy and dignity.”

“Prosecuting Wydrzynska is yet another cynical and ruthless attempt by Polish authorities to cut off all avenues to safe abortion care through fear mongering (…) The government should use its resources to ensure that everyone in Poland can get the sexual and reproductive health care they need,” added Margolis.