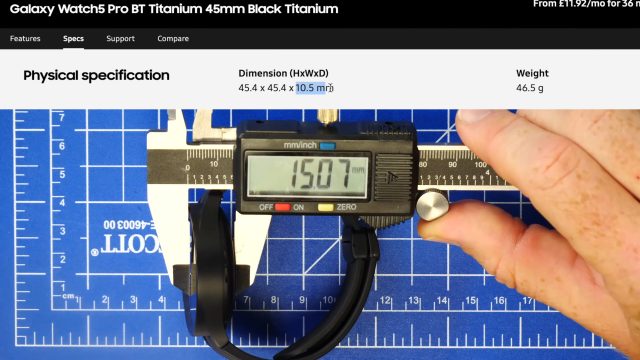 Watches are now increasingly “smart”, equipped with high-performance displays, multiple sensors for monitoring health and sports activities, and batteries to power them all. They’ve also grown in size as they’ve become better equipped to meet user expectations, but the companies that make them don’t seem to suggest this if we go by the specifications they officially present alone. The truth is that watches from Samsung, Apple and even Garmin are much bigger and heavier than noted in the specs list.

YouTuber DC Rainmaker came to this conclusion after measuring and weighing Samsung’s new Galaxy Watch5 and 5 Pro models, recently launched by the South Korean company. Apparently Samsung omits to measure when talking about size and the part on the back that houses the sensors. Thus, the thickness of the device noted in the specs list is represented by the metal body only, without the ceramic part. In the case of weight, only the body of the watch is weighed, not the straps it comes with

So the 40mm Galaxy Watch5 model, increases from 9.8mm as stated in the specs to 13mm in thickness. The 44mm model, which is supposed to be 9.8 grams thick and 33.5 grams in weight, actually comes in at 13mm thick and 55 grams with all the silicone straps. The Galaxy Watch5 Pro is listed at 10.5mm in the official specs list, but is actually about 50% thicker when the sensor area is added, for a total of 15mm.

DC Rainmaker says that of the wearable device manufacturers, Fitbit and Wahoo are the only companies that correctly list the dimensions and weight of their devices, with the rest of the companies preferring to choose certain measurements that make their devices smaller and lighter than they actually are.