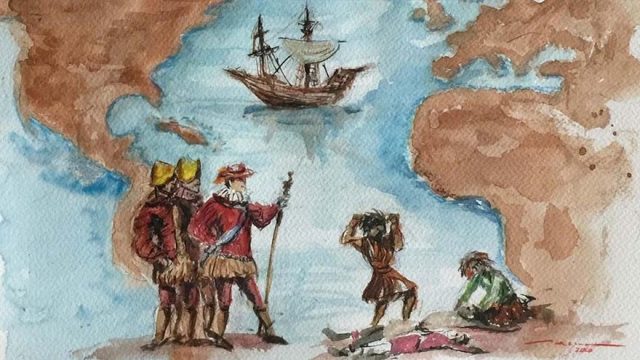 This information was published on the day

The Dominican Bartolomé de las Casas, a colonizer before he was a friar, he recounted in the ‘Brief report of the destruction of the Indies’ the “great and abominable tyrannies” that the conquerors inflicted on the Indians —they even trained greyhounds to tear them to pieces—, but the hosts of His Catholic Majesty counted, even without knowing it, with a much more lethal weapon than arquebuses and halberds; that is, contagious diseases. Smallpox and measles, above all, caused a very high mortality rate among the Amerindian populations. A cruel scavenger.

Since the world is world, plagues have imposed profound changes in the course of history. To thrive, a virus just needs movement and a bunch of people huddled together, and so smallpox, endemic to some Eastern cultures for millennia, reached Europe in the 11th century, with the Crusades, and He first arrived at the island of Hispaniola in 1518 aboard the ships of Columbus, inoculated into sailors who had already developed immunity.

Once in the Antilles, smallpox (fever, vomiting, possible blindness, and a rash whose welts sting like chili peppers) took barely two years to jump to the mainland, where The 600 men commanded by Hernán Cortés found an ally they did not count on in their bloody advance towards Tenochtitlán, the capital of the Aztec empire, whose population fell by 40% in a single year. From there, like a trail of burning gasoline, the epidemic went down the spine of the continent until reaching the Inca domains in 1526, according to the Canadian historian William H. McNeill in the essay ‘Pests and peoples’.

Read:  These are the symptoms that may indicate that you have scabies

Beyond famines from a failed harvest, the Amerindians did not know chain infections like those that had hit the Old World, perhaps because they had few domestic animals (with their parasites), and the llamas and alpacas of the Andes lived in herds too scattered and small for the infection to thrive in the wild. The book ‘Chilam Balam de Chumayel’, oral memory of the Mayans transcribed into the Latin alphabet by literate Indians, describes a world unscathed before the arrival of the ‘dzules’, the white men: “Healthy they lived. There was then no disease; there was no bone pain; there was no fever for them, there was no smallpox, there was no heartburn, there was no pain in the belly, there was no consumption. Straight upright was his body, then. The figures offered by demographers are shocking: If in the viceroyalty of New Spain some 25 million natives could be counted in 1519, the irruption of the cross, the sword, smallpox and measles meant that the indigenous people numbered scarcely a million in 1605.

Read:  What is an international health emergency and what are its consequences?

Life, unstoppable in its course, it is a continuous exchange of flows, ideas and undermining. The Spanish brought horses, pigs, wheat, and rice to the New World, and brought back tomatoes, potatoes, corn, and the addictive tobacco, plus another ‘gift’ hidden in the genitals: syphilis. Even when there was some scientific controversy regarding its origin, the most recent studies are inclined to embrace the hypothesis that, in effect, it was the crew of Columbus that transported this venereal disease on the porthole, which disfigured the bodies and could upset the mind to dementia. Luck of the discovery of penicillin; In times past, it was cured with rubs, plasters or toxic mercury vapors.