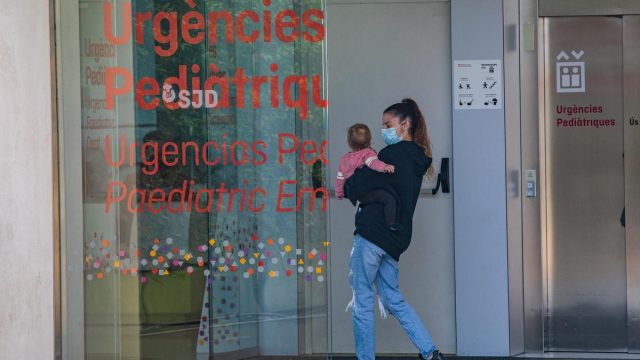 The Conselleria de Salut de Catalunya asks the families of children with any symptoms of bronchiolitis. to stay at home and avoid going to day care centers or schools to cut the transmission chains. The respiratory syncytial virus (RSV), responsible for bronchiolitis, has been present for the past week. saturating pediatric emergency rooms and pediatric ICUs. of Catalan hospitals and doctors believe that the peak will not arrive until November 29, approximately. At Balearic Islands, the Govern has admitted that bronchiolitis is “gaining strength” and has asked parents to avoid exposing the baby to crowds.

“If anyone has symptoms of an infectious disease, especially young children, should stay at home,” department sources say. It is the same recommendation given to anyone with symptoms of covid-19, for example, although confinement is no longer mandatory. The absence of obligatory facemasks. (except in public transportation, although many people do not respect this rule) and the immune memory loss of the last two years are behind this surge of bronchiolitis cases in younger children.

Hospitals have had to reinforce staffing, make their healthcare workers double shifts and to expand ICU and inpatient beds. to cope with the wave of bronchiolitis in children under one year of age. Although Salut assures that RSV transmission is the most important same as in ‘precovid’ periods, the truth is that many physicians are of the opinion that this year the epidemic curve is more marked than previous seasons. In fact, it is expected that the peak of this wave of bronchiolitis, estimated to reach around November 29, will be higher than in the prepandemia.

Read:  Antimicrobial lipstick that prevents the spread of viruses, bacteria and fungi

But not only the pediatric emergencies are overcrowded, but also the general by the mixture of other respiratory viruses such as covid-19 and influenza. The incidence of the latter has doubled in the last week. In the past seven days, respiratory infections have increased 14% in Catalonia, according to the most recent data from Salut, corresponding to last Tuesday.

“Hospitals all over Barcelona are very full. because of the increase in activity,” he points out Mireia Puig, the director of the Emergency Department of the Hospital de la Santa Creu i Sant Pau (Barcelona). There is, according to her, a lot of “urgent pathology” mainly due to respiratory infections: RSV and covid-19.

Read:  Health alert due to carcinogenic products in shampoo: all brands concerned

Right now the “novelty” of the ED is precisely this volume of patients. “The increase is progressive but unstoppable.” Puig assures. “Right now we have 3% more activity than in November 2019 and 15% more than in November last year,” says the director of the Sant Pau emergency department. “We are under a lot of pressure And so we’re trying to find space for the ER.” For example, the hospital has had to postpone the scheduled admission of non-urgent pathologies.

The entire system is under stress, both hospitals and primary care, although at Sant Pau, there are no patients in the corridors. as was the case on Monday at the Hospital del Mar. Puig calculates that the peak of the epidemic of flu will arrive around Christmas, on December 24 or 25. And, as for the covid-19, are also noticing an “unstoppable” rise.