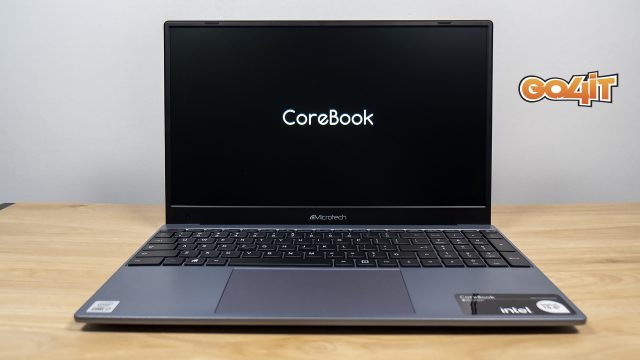 Microtech is a name you’ve certainly heard before, but sometimes it’s hard to associate it with a product. That’s because the Italian brand doesn’t seem to invest much effort in marketing, but rather in developing its products. At least that’s the impression I got from the CoreBook laptop I recently tested, a laptop that might be perfectly suited to the needs of a certain category of users. At first glance, it looks like a simple productivity laptop, but it hides some interesting and welcome features that are missing from other similar computers.

CoreBook has a subtle design that doesn’t stand out

The MicroTech CoreBook comes with a gray-colored casing that appears to be aluminum from a distance, but is actually plastic. Many laptops are made of plastic, including those in the very expensive, gaming ranges, so we didn’t feel that this would necessarily be a disadvantage. The truth is that it feels a little lighter in use than other 15″ computers I’ve tested lately, and plastic can help with that. Upon quick inspection, I noticed that on one hand it has enough connectivity ports to satisfy the need for computer expansion, but on the other hand these are not necessarily the ports most people want. We have two USB 3.0 Type-A ports, one on each side, a USB Type-C port for charging but also for accessories, a 3.5mm combo headphone jack, microSD slot, and even an HDMI, but a “mini” one.

So while the card slot is appreciated, especially by smartphone users, those who use cameras or video would prefer a full-size SD slot. Then, the small size HDMI requires an adapter or cable with MiniHDMI on one end to display on a screen or projector. The important thing is that it has such options, but I would have preferred the “standard” versions. Another element I appreciated from the start about the Microtech CoreBook, however, is that it integrates a door on the bottom cover that provides quick access (it has just two small screws) to the computer’s M.2 2280 SSD. You can remove the SSD and replace it with a larger one whenever you want, without completely unpacking the laptop and without voiding the warranty. Unfortunately, the RAM is not accessible in the same way.

It’s apparent, however, that Microtech is a smaller company that can’t yet afford to create multiple variants of its laptops. Thus, in Romania, the keyboard is shipped with special stickers on each key to ensure an “international” key format, with all the letters and symbols as we know them from regular keyboards. Most likely, underneath these stickers is a keyboard in Italian, the manufacturer’s home country. I’m not particularly bothered by this, as the stickers are not paper, but plastic, and have a nice texture to the touch. However, anything glued on, can also be peeled off. I’d rather be interested to see the durability of the keys. I’ve also seen such stickers for Apple laptops, which some home users apply to models bought in other countries, such as Germany or France. Other design features on this laptop, however, are somewhat more positive. We have a huge trackpad under the keyboard, one of the largest on a Windows laptop of those tested in recent years, similar to one on a MacBook. The keyboard also has a numpad on the right side, useful for those who work in Excel or do a lot of calculations. Also, to keep a thin bezel around the screen, Microtech has turned to a webcam positioned on the bottom-left side of the screen. It’s an unusual positioning, but useful for those who don’t use their webcam very often anyway.

But one of the biggest advantages of this computer is the plug-in adapter. Not only is it only slightly larger than a smartphone one, but it’s also USB-PD (Power Delivery), which means it can be used to charge any other device compatible with this technology at high power (within 65W). More interestingly, however, it is a universal one. It can be plugged into US/China sockets without any other accessories, but European or UK heads can also be attached and are included in the package. Of course, the charger comes with a USB-C cable on both ends. As the name of the laptop suggests, the configuration offers “core” performance

The CoreBook tested is a top configuration from MicroTech’s offering. This is the model with the best performing processor in the range, an Intel Core i7-1065G7, configured with 16GB of RAM and a 512GB SSD. As I said at the start, it’s easy to swap out the SSD as you go, so you can choose the lowest capacity variant in the hope of an upgrade.

The screen is a common one for a non-premium laptop: a Full HD 16:9 IPS panel with a 15.6″ diagonal, while the 6,000 mAh battery promises around 5-6 hours of productivity. We appreciated that Microtech doesn’t try to make the battery life seem longer than it actually is, offering stats based solely on video playback or other unrealistic use cases. And it’s all packed into a 1.9kg computer that’s fairly light for its size, which, along with the small charger, could be a good performance computer to take in a bag or backpack for work. This review should apply to any other CoreBook models, as Microtech is also developing variants with AMD Ryzen processors. Of course, performance will be different between each configuration. There are models with 8 or 16 GB RAM and Intel Core i3, i5 and i7 processors, or AMD Ryzen 3, 5 and 7 3000 series and from 256 to 2 TB SSD storage.

CoreBook offers Windows and Linux, under one roof

Something we haven’t mentioned before about this laptop model is that it came from the factory configured with two operating systems. One is Windows 11 Pro, a version without any customizations or bloatware. This is a big plus, as many laptops from well-known manufacturers come with dozens of apps and ads, including software that can hurt your performance like the infamous McAffee antivirus software or Norton Internet Security.

When you first start Windows 11 Pro, nothing “foreign” is running in the background, and all drivers are updated via Windows Update. It’s a completely “standard” Windows, just like the one you can install manually from Microsoft’s website. The second operating system is LiberOS, a Linux distribution focused precisely on the idea of security and data confidentiality. It has a macOS-inspired interface, called Pantheon DE, which aims to provide simplicity in design and use. It has a dock at the bottom where you can attach your favourite apps and a control bar at the top. For everyday use, this operating system can provide everything you’d need from a computer, and for advanced Linux users, it could be perfect for “serious” work as well.

Implicitly, this CoreBook’s SSD is split in two, half for each OS, but you can drop either OS if that’s what you want. Incidentally, Microtech sells the CoreBook with four OS options: Windows 11 Pro, LiberOS, Ubuntu, or even ChromeOS. Of course, the Windows option is a bit more expensive. The fact is that Microtech has created a laptop that would be especially appreciated by advanced users who need a good, but not top-notch, performance computer that is not “for movies”, or “for games”, but is a well-built, high-performance tool for work. The fact that it is “friendly” to other operating systems and allows storage upgrades is a plus, while the large keyboard and more than generous trackpad will certainly be appreciated.

The webcam is neither very powerful nor well positioned, always having your fingers in the frame when typing something because of the positioning. I’ve also seen something like this on Huawei laptops that had the camera hidden in a key in the top function button area. It’s good that it exists, in case you need it quickly for a video call, but it could get annoying for someone who sits in video calls all the time and still wants to get other tasks done in parallel. On the performance profile, the cooler starts at medium revs compared to other laptops, but the sound is not annoying. However, to avoid running fans during regular use, the laptop can be moved to a balanced profile.

If the CoreBook also had a full-size HDMI port, there would be little to complain about with this laptop model.

Even though it includes a Core i7 processor, which is considered powerful, the CoreBook is not an extreme performance laptop. It’s a laptop you can write code on, be very productive in the office on, or run more demanding applications on, but it won’t replace a high-performance computer. It uses a processor from two generations ago, already, and it’s not even an H-range processor, but one of a series dedicated more to ultra portables. So, the test results again affirm that this is a no-frills laptop and I recommend those who don’t need an i7 to even look at the i3 or i5 versions, as they are considerably cheaper and otherwise the laptop offers the same advantages.

The SSD is a weak point though, operating only at SATA speeds. It could, however, be exchanged for an NVMe one with higher speeds. However, changing the SSD should only come if the speed offered by the included one is not enough. In normal use, most users won’t see much difference. Applications start up quickly, and Windows loads quickly. Only if the use case demands a faster SSD would it be worth upgrading.

The Microtech CoreBook is exactly what it promises: a computer that delivers a basic experience, but with advantages over models on the market. Although it comes with a pre-installed operating system, it’s not full of bloatware, and Linux is even encouraged by the manufacturer for those who want an alternative to Windows. We’re also dealing with a small, lightweight charger, upgradable SSD and enough performance to satisfy most office use cases.

The presence of these devices in the market proves that there is a demand for computers of this kind as well, and those looking for one won’t be disappointed with the Microtech CoreBook. Of course, there are small drawbacks, but after spending more time with this laptop, it seems to me that these outweigh the advantages.