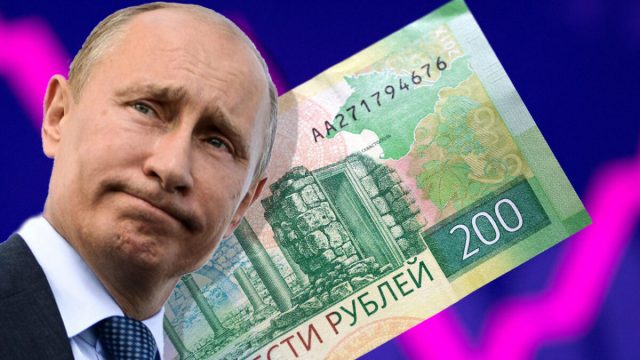 Russia’s Economy Ministry says the economy’s gross domestic product (GDP) is expected to fall by 4.2 percent this year and that inflation in Russia will not be as high as economists had predicted. At the same time, inflation in the European Union has exceeded 10%. Russian President Vladimir Putin blames the sluggish global economy and the ongoing war in Ukraine on the United States, stressing that the U.S. needs “conflicts to maintain its hegemony.“

The Russian Ministry of Economic Development’s forecast is much better than initially expected.

By the end of June the Russian ruble had reached a seven-year high against the dollar. Russia has been sanctioned for the conflict in Ukraine by the United States and a myriad of Western countries. When the war began last February, analysts and economists expected the Russian economy to sink and not recover from the tightest financial restrictions in years. However, U.S. economists were baffled by the resilience of the ruble after the currency rebounded a few months after the initial invasion.

This week, the Russian Ministry of Economic Development released a report on the economic situation in Russia. It detailed that the Russian economy is doing better than expected and that, although GDP will fall this year, inflation will not be so high. The news follows the rise in inflation in Europe, which exceeded 10% this week. Inflation in the U.S. is high: in June, the consumer price index (CPI) reached 9.1% and in July it cooled somewhat to 8.5%. Meanwhile, Russia, China and the BRICS countries are planning to create a new international reserve currency, and the Bank of Russia aims to launch the digital ruble in 2024. While the ministry once thought the country’s GDP would decline by 12%, the data now shows a different story.

Al Jazeera reports, “Russia’s gross domestic product (GDP) will fall by 4.2 percent this year, and real disposable incomes by 2.8 percent, compared to declines of 7.8 percent and 6.8 percent, respectively, seen three months ago.“Al Jazeera reports that this much smaller than expected decline in GDP comes as Russia has been sanctioned by 46 countries and has seen 9,117 financial sanctions imposed on the Russian Federation. According to the report, the economy ministry predicts that inflation by the end of 2022 will reach 13.4 percent. Russian President Vladimir Putin also explained this week that Russia will sell “high-precision weapons and robotics“.

Vladimir Putin blames the U.S. government and says Nancy Pelosi’s trip to Taiwan was a “blatant display of disrespect.”

Putin blames the U.S. for trying to maintain its economic hegemony, and during a speech in Moscow on Tuesday, the Russian president did not hesitate to denounce the actions of the U.S. government. “They need conflict to maintain their hegemony“, said Putin in his speech. “That’s why they turned the Ukrainian people into cannon fodder. The situation in Ukraine shows that the United States is trying to prolong the conflict, and it is doing exactly the same thing in trying to fuel conflicts in Asia, Africa and Latin America“, added the Russian president.

Putin also criticized Nancy Pelosi for her recent visit to Taiwan and noted that the visit was intentional. “The U.S. adventure to Taiwan was not just the trip of an irresponsible politician. It was part of a deliberate and conscious U.S. strategy to destabilize the situation and create chaos in the region and around the world, a blatant demonstration of disrespect for the sovereignty of another country and its own international obligations“, said Putin during his speech in Moscow on Tuesday. In addition, the country’s economy ministry omitted oil price forecasts and gave no reason why the data was omitted. Reports indicate that the government and the budget committee of the Russian Federation will review the ministry’s forecast.