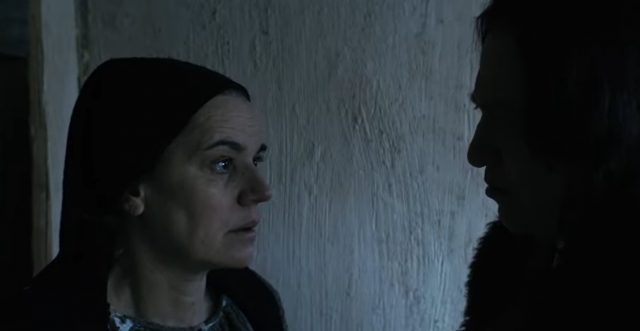 Film horror The Romanian Three-legged Goat is currently on a promotional tour across the country and has inevitably arrived in Galati.

Perhaps the greatest luck of this film is the cast, which includes Maia Morgenstern (as the “goat”) and Marius Bodochi (as the “wolf”), “this Javier Bardem of Romania”, as Victor Canache, director and screenwriter of the film, said last night at the premiere in Galați.

The Goat with Three Eyes, a film you must see if you are Romanian, but which would probably be much more appreciated by cinephiles in other countries

The great “handicap” of this film is that Romanians already know how The Three-legged Goat begins, how it continues and how it ends, precisely because they grew up, willy-nilly, with the stories written by Ion Creanga.

Even so, curiosity may drive you to want to see the screening anyway, precisely because you know the story – a paradox that works perfectly in the given context. And as I mentioned earlier, the chosen cast is attention-grabbing, without fail.

Read:  Where the planet's celebrities were born: the interactive map that shows you exactly where

However, with all due respect, we dare add that the film would work perfectly well outside our borders, perhaps even better than at home, but on one condition: either it gets picked up by Netflix, or more investment in international marketing.

The dark “vibe” (with consistent slow-burn accents) of this film, coupled with the mystical-romantic atmosphere, could work perfectly with niche audiences just like The Lighthouse and/or The Northman, both directed by Robert Eggers.

The Three-Eyed Goat is Canache’s first film and comes after the 2019 short film of the same name. According to the young filmmaker, an actor and stuntman in the United States when he’s not making films in Romania, the set was carried and built on the hill by both him and Luana Georgiță, the film’s producer, as well as “relatives and friends” of the two. Knowing this, you’ll be able to appreciate The Three-legged Goat for what it is. The old house looks authentic, in the true sense of the word.

Read:  NieR: Automata is becoming an anime series: what we know so far about it

The film is by no means the “first Romanian horror”, as it has been marketed, as before it there was Miss Christina, from 2013, directed by Alexandru Maftei, with a screenplay inspired by the literary work of the same name, written by Mircea Eliade. Beyond that, The Three-Eyed Goat may be the best Romanian horror film.

Asked why he chose this story and not another, Victor Canache pointed out what generations growing up in the 80s and 90s already knew: The Three-Eyed Goat is not a children’s story at all, but a full-blown horror story. Clearly, the goat was never a goat, and the wolf was never a wolf, and that’s despite the “censored” version that adults present to children in 2022.