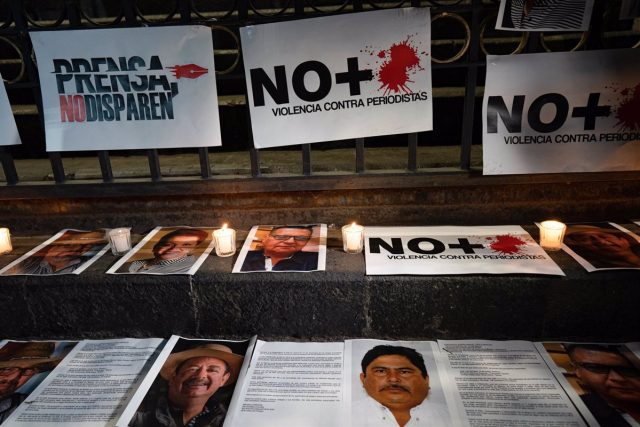 A total of 134 journalists were murdered in Mexico from 1992 to 2021, according to data from the Committee to Protect Journalists (CPJ), making it one of the most dangerous countries to work in. the profession being the deadliest in the world for these professionals.

The International Press Institute places Mexico as the most dangerous nation for journalists, while Reporters Without Borders (RSF) places the Aztec nation at the top of its mortality ranking of information professionals for the third consecutive year. According to RSF’s annual report, behind Mexico are Afghanistan, India, Yemen or Pakistan, thus forming a group of five nations where press freedom is also more than questioned.

Thus, to date six other murders of press professionals have been added and, although CPJ today only recognizes four of them, in just a month and a half, the current year 2022 is already one of the most deadly, although still far from the figures for years like 2019 or 2010, when eleven and ten deaths were reported, respectively.

From the Mexican organization Propuesta Cívica, which fights for the defense of human rights activists and journalism professionals, they have transferred to Europa Press their concern about the “systematic pattern of violence” that is currently being experienced in the Central American nation. The entity’s executive director, Sara Mendiola, has focused not only on the physical violence suffered by journalists, but also on “legal or digital attacks.”

“Journalists in Mexico are constantly receiving death threats through electronic means. We are also having an increase in lawsuits for ‘moral damages’, which are being used, mainly, by public officials and political actors to stop journalistic investigations,” he lamented.

The non-pecuniary damage formula, according to the Mexican Civil Code, occurs in those cases in which “the liberty or the physical or mental integrity of persons is illegally violated or undermined.”

Mexico also faces high rates of impunity for crimes against journalists, not only in relation to murders but also in the disappearances suffered by professionals, where impunity, according to Mediola, is one hundred percent and “none disappearance has been clarified.

The president of Mexico, Andrés Manuel López Obrador, has repeatedly spoken out against some of the communication professionals, whom he has even labeled as “adversaries”.

In addition, the president has recently branded a journalist who published a report on the luxurious life of one of his children a “mercenary” and has accused another professional of “deceiving for a long time.”

All these criticisms of López Obrador to the Mexican press have been given in public during the daily press conferences that the president holds from the National Palace, located in the historic center of Mexico City.

This is precisely one of the points that, from the organization for the defense of journalists, criticize the fact that the president launches attacks on the press from a press conference that “has the appearance of a democratic exercise”, but that ” It’s the opposite.”

“It’s information manipulation, it’s to place the issues, figures and information that (López Obrador) wants to place on the public agenda,” according to Mendiola. Journalists have responded with investigations to the president’s statements, which has led to public criticism of a president who has already been questioned on several occasions for lashing out at the press.

However, according to Mendiola, the president does not charge against the journalistic profession in general, but only against those individuals who, through their investigations, are “discovering acts of corruption by the current government”, which is precisely the fight against corruption and impunity among its most promoted banners.

One of the most popular murders of journalists in recent history has been that of Lourdes Maldonado, who lost her life after being shot several times on January 23 near her home in the city of Tijuana, located in the state of Baja California.

Maldonado, who had almost 50 years of experience, had come to ask the president for help because “he feared for his life” after being immersed for several years in a lawsuit against a former governor of Baja California.

The journalist was also protected under the Federal Protection Mechanism, however, in light of the facts, the shortcomings of this legal tool have become evident. “It is a mechanism that has been insufficient, a policy that has not been effective in the face of violence and the response of journalists to the president has been a claim to demand that the authority stop stigmatizing their work,” he has revealed. Mexican activist.

Read:  Switzerland adopts EU position on energy and plans to save 15% of its energy costs

Although it is true that in recent days the arrest of some alleged perpetrators of the journalist’s murder has been announced, Civic Proposal is not convinced of the veracity of such a “fast” investigation process.

“They have investigated with a speed rarely seen. The risk of this is that investigations are being generated that are not based on reality, that there could be fabrication of evidence and of those responsible in the face of the inability of the Mexican State to put a stop to the attacks against journalists,” warned Mendiola, who fears that the authorities are trying to construct a discourse to make people believe that there is no impunity for this type of crime.

INVESTIGATIONS TO THE AUTHORITIES

One of the main points in common of the journalists who have died in recent times in Mexico is their investigative work on alleged links between the territorial authorities and criminal groups dedicated to drug trafficking.

As Mendiola has detailed, there are even cities in the country where there is already talk of the presence of a “narco-government” at the head of the institutions and some journalistic publications link certain officials with the drug trafficking groups that prevail in Mexico. Along with Maldonado, this year José Luis Gamboa, Roberto Toledo, Margarito Martínez, Marcos Ernesto Islas and, recently, Heber López have already lost their lives.

The city of Tijuana, bordering the United States, is the scene of several of these murders, specifically three of the events have occurred in this territory. The rest of the deaths so far this year have occurred in the state of Veracruz, in Michoacán and in Oaxaca.

The journalistic profession lives in an almost constant convulsive climate in the North American nation, where information professionals see how every year some of their colleagues lose their lives for carrying out their work, while the national authorities themselves openly criticize, harass and question some of the most critical journalists.