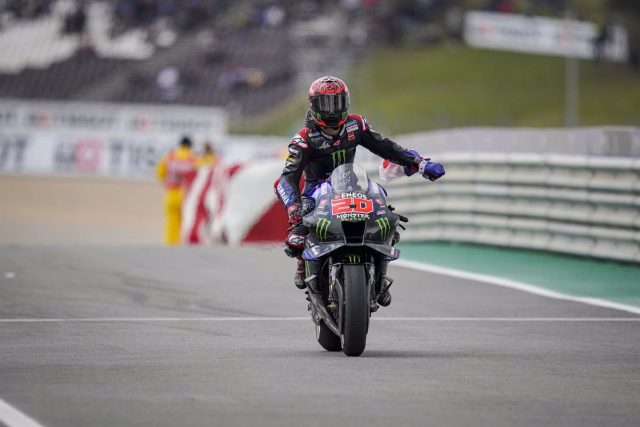 Frenchman Fabio Quartararo (Yamaha), in MotoGP; the British Jake Dixon (Kalex), in Moto2; and the Spaniard Izan Guevara (GasGas), in Moto3, dominated Friday’s free practice session at the Spanish Grand Prix, the sixth round of the Motorcycle World Championship, in which Marc Márquez (Repsol Honda) suffered two crashes in the same lap and has been relegated to the bottom of the time table.

‘El Diablo’, winner last weekend in Portimao and leader of the general classification of the premier class, has preserved the winning inertia to stop the momentum of the Ducati, who were able to place three of their bikes among the first four of the day.

Thus, a magnificent time of 1:37.071 allowed the Nice rider to beat the Italians Enea Bastianini and Francesco ‘Pecco’ Bagnaia and the Spanish Jorge Martín by two tenths, the three riders riding a machine from Borgo Panigale who managed to sneak into the upper zone of the time table of the combined.

Meanwhile, the Japanese Takaaki Nakagami (Honda) completed the ‘Top 5’ with the fastest Honda, and the South African Brad Binder (KTM) and the Spanish Pol Espargaró (Repsol Honda) finished sixth and seventh, half a second behind the Frenchman, just ahead of Alex Rins (Suzuki), second in the morning, and Maverick Viñales (Aprilia).

The 2020 MotoGP world champion, the Balearic Joan Mir (Suzuki), was unable to defend the first position he occupied in the morning session and finished twelfth, one position better than Aleix Espargaró (Aprilia).

Marc Márquez (Repsol Honda), for his part, went into the gravel twice in just a few seconds, once at turn 6 -the Dani Pedrosa- and another at turn nine, and, after being helped precisely by his former teammate Dani Pedrosa , at the service of KTM but who took him to the garage by motorcycle, could not react in time on his return to the track and could only finish nineteenth.

In the small displacement, the Spanish Izan Guevara (GasGas) emerged in the afternoon, with much more favorable track conditions than in the morning, as the fastest of the day at the Jerez-Ángel Nieto Circuit by setting a time of 1:46.341 that nobody could beat.

Both the Japanese Ayumu Sasaki (Husqvarna) and the also Spanish Jaume Masià (KTM) finished one tenth, completing the day’s podium. Meanwhile, Carlos Tatay (CFMoto) and the Turkish Deniz Öncü (KTM), the dominator of the morning session, closed the ‘Top 5’.

Read:  Marc Márquez: "It's a shame, but not racing was the best decision"

For his part, the leader of the World Championship, Sergio García Dols (GasGas), was unable to improve on the third place achieved in the FP1 and, hampered by a couple of falls without major consequences in the afternoon – the first in the Dani Pedrosa curve and the second in the 11-, finished Friday in eleventh position.

Finally, in Moto2, the British Jake Dixon (Kalex) revalidated his dominance in the morning and led the combined category in the intermediate category ahead of the Spanish Augusto Fernández (Kalex), who improved from third in the first session to second in the second. and that he was, together with the Englishman, one of the only two pilots capable of lowering the 1:42.

Meanwhile, the Japanese Ai Ogura (Kalex) climbed to the third drawer of the ‘podium’ of the day, in which the 2020 and 2021 Moto3 world champions, Albert Arenas (Kalex) and Pedro Acosta (Kalex), finished sixth and seventh respectively and in the Arón Canet (Kalex), the best Spaniard in the general -fifth-, finished the day ninth.