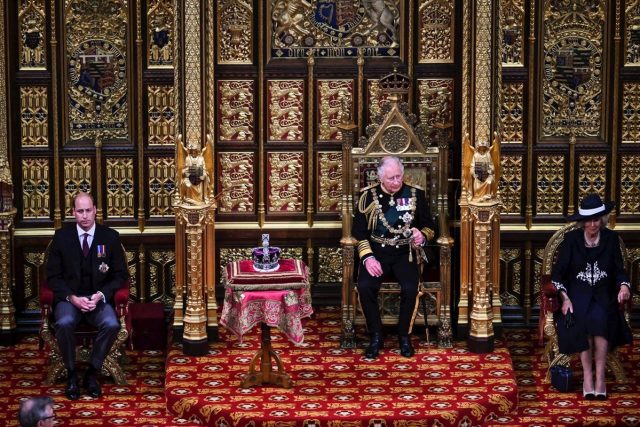 Prince Charles delivered the traditional opening speech in the British Parliament on Tuesday, in which he revealed that the priority of the United Kingdom Government is the “growth and strengthening” of the economy and the reduction of the cost of living for british families.

This is the first time since 1963 that Queen Elizabeth II, who has recently suffered health problems, does not go to Parliament to officially inaugurate the new legislature and read the government program, focused on alleviating the economic conditions of citizens, derived from global problems such as the war in Ukraine.

In this context, he has assured that the British Executive will finance a “sustainable” investment in the country’s public services, and has indicated that, among other aspects, it will be carried out “reducing the level of debt while reforming and cutting taxes “.

“My government will increase opportunities throughout the country and will support more people getting jobs,” assured Carlos, who mentioned other priorities of the British Executive, such as making the streets safer or reducing arrears in the national health system, after of the COVID-19 pandemic.

Carlos has also alluded to Ukraine, a country to which London has provided military and humanitarian assistance since the Russian invasion began on February 24.

“In these difficult times, my government will play a leading role in defending democracy and freedom around the world, including continued support for Ukrainian citizens,” Prince Charles said, according to the BBC.

In the energy field, the prince has assured that the Government will approve a law that will facilitate the transition towards “cheaper, cleaner and safer” energy. He has also spoken about education and has assured that his government’s educational reform “will help each child to show their full potential regardless of where they live.”

Read:  Cuba bids farewell to 14 of the deceased in the Matanzas macro fire

Prince Charles has also spoken and outlined some laws aimed at reducing crime and focused on immigration. As he explained, the Government will protect the “integrity” of British borders and guarantee the “security” of its citizens.

“My ministers will take action to prevent the dangerous and illegal crossing of the English Channel and will target the criminal gangs that enrich themselves by facilitating it,” he said. As for crime, he has assured that the government will pass a law that will give the Police “powers to make the streets safe.”

The prince also mentioned the situation in Northern Ireland and Brexit. Thus, he has stated that the Government “will prioritize” the Good Friday Agreements and the Northern Irish institutions, “also through laws to address the legacy of the past.”

The Good Friday Agreements ended decades of conflict in Northern Ireland. They have come to the fore again due to Brexit trade deals and last week’s election, which was won by Sinn Féin, a party historically associated with the IRA terrorist group.

On the other hand, he assured that the Government “will continue to take advantage of the opportunities of the United Kingdom’s exit from the European Union (EU) to support economic growth.”

Finally, Prince Charles has also indicated that he awaits the arrival of the events to celebrate the Platinum Jubilee of Elizabeth II, who celebrates 70 years on the throne this year. Carlos has left Parliament accompanied by his son, Guillermo, and the Duchess of Cornwall, Camila.

His departure means that Parliament can begin its work. Thus, the deputies will return to the House of Commons, where the Prime Minister, Boris Johnson, has made a statement on Carlos’s speech and a debate takes place.

Read:  EU and WHO call for joint flu and coronavirus vaccination this winter

COST OF LIVING, PANDEMIC AND UKRAINE, THE ISSUES OF JOHNSON

During his speech, Johnson, who thanked Prince Charles for his speech and sent his “best wishes” to Elizabeth II, alluded to a range of topics, including the cost of living, the war in Ukraine or the COVID-19 pandemic, among other issues.

Johnson has picked up the witness of Prince Charles and has assured that his Executive will act “urgently” to alleviate “the burdens of families and companies” throughout the country. Recalling some of the measures already undertaken in this regard, he has nonetheless called for “not simply spending to get out of the problem”, despite how “great” the “compassion” is.

According to the British prime minister, the country needs to “grow” to get out of the situation and has pointed to the creation of “hundreds of thousands” of new “highly skilled and high-paying” jobs.

Regarding the conflict triggered by the Russian invasion of Ukraine, Johnson has detailed that, on Sunday, he urged the G7 leaders to support kyiv “more and faster”, while expressing his “sadness” about the situation in Mariupol , one of the cities in Ukraine in which war crimes have been committed.

In addition, he has indicated that London “should be proud” for “having led” in the response to Ukraine, providing weapons so that the Ukrainians can defend themselves from the Russian Army. “We will persevere in our support for Ukraine”, assured the ‘premier’.

In reference to the response to the COVID-19 pandemic, Johnson has highlighted that his Government has worked “hard” to protect British citizens.