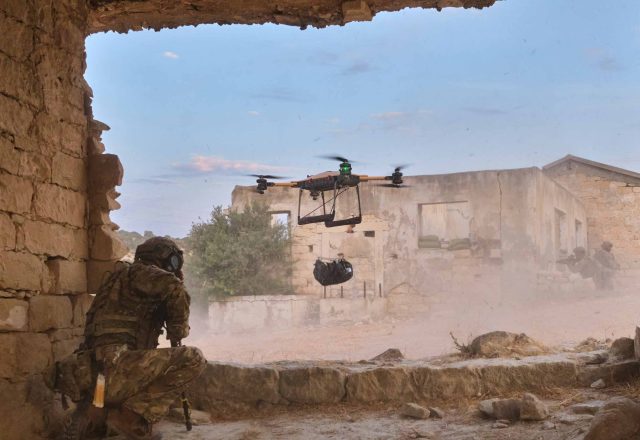 According to US General John Pershing, infantry are winning battles and logistics are at war. Much of Russia’s problems in Ukraine are caused by a poor supply of fuel, weapons and supplies. Agile groups of Ukrainian soldiers have made a habit of destroying Russian trucks behind enemy lines.

But Ukraine’s logistics systems are also vulnerable. The last thing Kiev and its allies want is for a shipment of Javelin anti-tank missile launchers to be destroyed by the enemy.

That’s why the British are sending dozens of T150 cargo drones to Ukraine, capable of carrying heavy loads. The aircraft, manufactured by Malloy Aeronautics, can carry a maximum weight of 68 kilograms and have a range of 70 km. An FGM-148 Javelin system weighs approximately 23 kilograms, and a FIM-92 Stinger launcher
weighs 15 kilograms.

Drones can quickly bring supplies, ammunition and weapons to the front-line units that need them, with minimal risk of being intercepted. With their help, supplies can be sent to the military surrounded by the former Azovstal steel plant in Mariupol.

The aircraft will be used, more than likely, for attack. Ukrainian soldiers have already turned civilian drone models, such as those from DJI, into platforms capable of dropping bombs on enemy infantry and tanks.

The T150 drones are part of a new $ 370 million aid package approved by the United Kingdom for Ukraine. It also includes radars that detect enemy artillery, GPS jamming systems and night vision devices.

Malloy Aeronautics is preparing an even more impressive drone for the British Navy. The T400 is capable of carrying a maximum weight of 180 kg. The aircraft can pick up wounded from the battlefield or be equipped with mini-torpedoes.