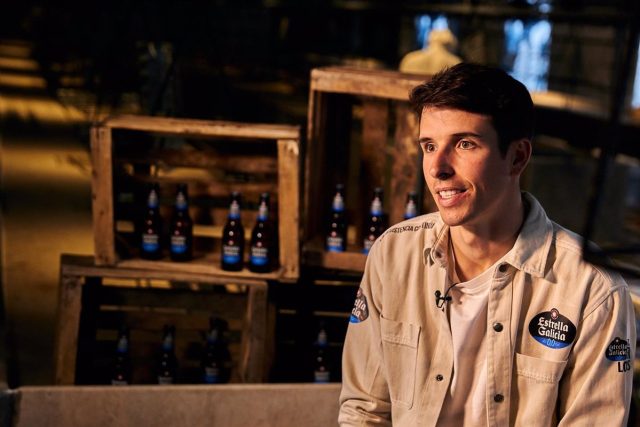 The Spanish MotoGP rider Álex Márquez admitted that the improvements to the front end of the bike will allow him to “take a leap forward” and feel the Honda “more” his to be able to extract its potential and be more constantly in a ‘Top 10’ than does not see “very far” and achieve results that until now “are not entirely realistic” because they have “more potential”.

“Since Qatar I began to notice the problems in the front end. Now we have seen the way forward, we are working on it and they are going to bring improvements. That is where we can take an important leap forward and feel the Honda more mine to get the potential he has”, said Márquez in statements to Europa Press at the Portimao Museum after an act of Estrella Galicia 0,0.

The younger brother of the Márquez family admitted “the little anxiety” that he suffers from wanting to achieve “good” results and, above all, to be able to enjoy himself. “When the results don’t come out, I’m the first one who wants to be competitive, fight for the top positions and be in front, which is when you enjoy and have a good time because the start of the season, what it is to enjoy has cost, only in some specific moments “, he pointed.

About the start of the season, he has managed to score points in two of the four starts, occupying the twentieth place in the championship with 4 points. “In preseason I never became very euphoric because I knew that there were many things about the bike that I did not control. From Malaysia we saw that we were fast and constant, but in the front end, at least for me, it did not feel entirely good for me. driving style”, stressed the Catalan, who this Sunday will start seventh in the Portuguese Grand Prix, his best qualifying in his three seasons in the category.

“It’s been a difficult start, the results aren’t entirely realistic, because we have more potential. I criticize myself and when I don’t feel good I should get something else out and be more competitive,” he added about his performance during the season.

Asked about his riding, Márquez stated that he enjoys when he is fast and understands what he is doing, quite the opposite of when crashes come and he does not know where the limit is. “That’s where a driver doesn’t enjoy driving. That’s where I’m so keen to turn the situation around and enjoy the Grand Prix,” he said.

Now, Honda is working on the front end and will bring improvements to alleviate the problems with the front end. “The problems are what we expect from a new bike, we had few training sessions in preseason, it goes from theory to practice for a while and that’s where we see what problems really exist. We haven’t stopped working, and we have to keep pushing for when we we can feel better about turning the tables,” he admitted.

In fact, the Honda rider remains optimistic about finishing the competition in the ‘Top 10’. “I don’t see it very far away, there are days when it gets more and less complicated, in Qatar until the crash we were ninth. In Mandalika we suffered all weekend and in the race we were finally close to the ‘Top 10’. These are details that must be polish, many, but the problem has been identified,” he said.

Since the start of the season, what has surprised him most are the “ups and downs” of the drivers on the grid. “In Europe there will be more stability and the positions more distributed each race. For small details you go behind, a few years ago when you were a second and a half away you were in seventh position, now almost last”, he added.

Finally, the youngest of the Márquez highlighted “the great news” of the return of his brother Marc in Austin, where “he managed to be competitive”, something that gives them hope to “keep believing”. “It’s a matter of time before we improve the weak point and Marc is setting the pace for us. He knows Honda very well and the bike and his instructions are good, especially for me, since our riding is very similar,” he said. .