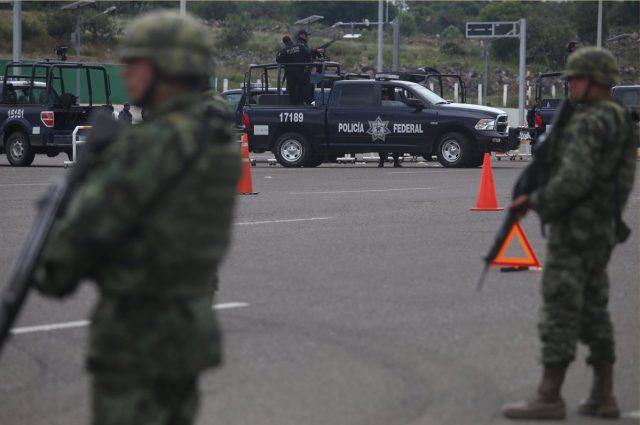 Mexican security forces announced Saturday night the arrest of 164 members of an armed group in the southwestern state of Michoacán, they said on their Twitter account.

“In this operational action the arrest of 164 people was achieved, they seized 142 rifles, 44 small arms and 28 vehicles, one of them armored,” the Michoacan State Public Security Secretariat has made known.

The detainees are alleged members of a group called Pueblos Unidos, reports ‘La Voz de Michoacán’, who have been transferred to a delegation of the Attorney General’s Office in Morelia following one of the most important arrests in recent years in the state.

According to Pueblos Unidos, the 164 peasants were detained while on their way to the municipality of Zirapondiro after learning of the attempted kidnapping of an avocado producer in that area.

In retaliation for this arrest, Pueblos Unidos gunmen have detained 40 National Guard agents to demand the release of their comrades who, they claim, “are not members of any criminal cell but peasants who have armed themselves” to defend the town from criminal groups that have extorted and terrorized farmers and avocado producers for years.

In addition, blockades have been carried out with buses, cargo trucks and trees crossed on several highways. “The intention of the blockades is to want to negotiate. We want in Pueblos Unidos that they let the required people go. If they want to keep the weapons, let them keep the weapons, but they should not hand them over. No cars have been burned or anything like that because we are trying to dialogue,” said a spokesman for the group in declarations to ‘Milenio’.

However, after organizing an operation to free the agents, the members of Pueblos Unidos have released 25 members of the National Guard, according to the newspaper ‘El Universal’. The reason for the discrepancy in the number of detainees is unknown, but the authorities assume that there are no remaining agents.

Sources from the security forces have argued that there is no margin for negotiation with those who break the law, which is why they justified the operation prepared to free the agents. The 164 imprisoned members of Pueblos Unidos remain in the facilities of the Attorney General’s Office in Morelia.

Pueblos Unidos is an extension of the criminal organization Carteles Unidos, originally conceived as a self-defense group for groups of farmers that has ended up becoming an armed organization.