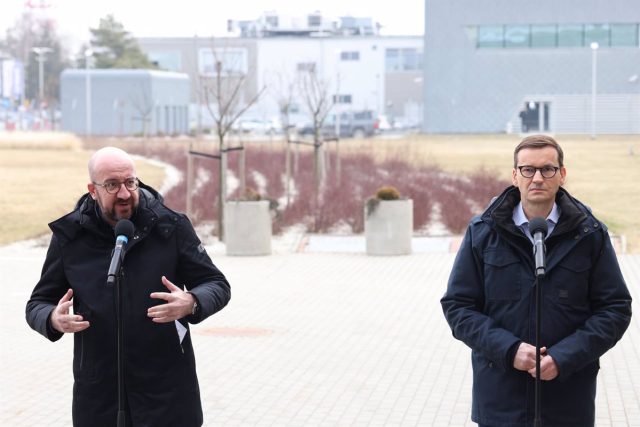 The President of the European Council, Charles Michel, and the Prime Minister of Poland, Mateusz Morawiecki – Dario Pignatelli/EU Council/dpa

The Prime Minister of Poland, Mateusz Morawiecki, has assured this Wednesday that the country keeps its border open to “all refugees from the war” in Ukraine, regardless of whether they are nationals of that country or not, in a response to criticism received. against Warsaw for the problems that refugees of African origin are encountering in their attempt to reach the EU.

“Poland welcomes all people fleeing war, all war refugees regardless of their country of origin,” Morawiecki said in a press appearance accompanied by the President of the European Council, Charles Michel, who has traveled to the Polish border to observe the situation first-hand and demonstrate the support of the rest of the EU partners.

The Polish Prime Minister has thus rejected criticism from African refugees who have denounced in recent days problems reaching the European Union despite fleeing the Russian invasion of Ukraine.

Read:  Sri Lanka grants docking permission to Chinese research vessel amidst pressure from India and US

Morawiecki has defended that the Polish authorities, who have already suffered criticism in the past for the obstacles to asylum seekers who try to request protection in Poland, treat “everyone with dignity and fairly, because there is no other way”.

“We treat everyone humanely, all war refugees regardless of whether they are Ukrainian citizens or citizens of another country,” he insisted, after blaming “Russian propaganda and manipulation” for the information reporting problems.

The Ukrainian Foreign Minister himself, Dimitro Kuleba, confirmed on Tuesday the problems that the Ukrainian government was encountering in helping African citizens to leave the country and appealed for equal treatment for all displaced persons, without clarifying the obstacles to which he alluded.

“The Africans who seek to be evacuated are our friends and they need to have the same opportunities to return safely to their homes,” Kuleba said in a message on Twitter that the High Representative for Foreign Policy of the EU, Josep Borrell, has taken up this Wednesday to ask “loud and clear” for equal treatment for these people.

Read:  Kremlin reports that Putin will not attend or speak by videoconference at UN General Assembly

In its proposal for automatic protection for all displaced persons residing in Ukraine, the European Commission has called on Member States to guarantee such protection not only to Ukrainian nationals but also to residents of Ukraine of other nationalities, including refugees. The measure will be examined on Thursday by the EU interior ministers, who will decide whether to give the go-ahead for its activation.

Meanwhile, the European institutions are trying to make clear the EU’s support for the countries in the front line of entry for the thousands of displaced people –650,000, according to the latest data– and to ensure humanitarian support.

In addition to the support of European agencies such as Frontex and specific funds, the President of the European Council, Charles Michel; The head of the Community Executive, Ursula von der Leyen, and Borrell himself are traveling these days to various points on the border to examine the situation. Von der Leyen travels to Romania and Slovakia this Wednesday, while the head of European diplomacy is already in Moldova.