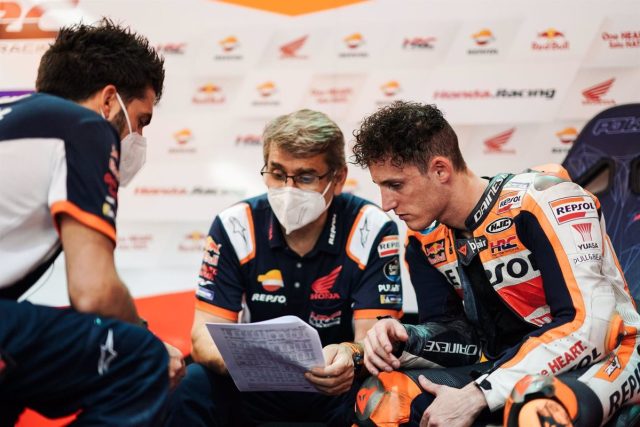 Bradl: “I will do my best for the Repsol Honda Team”

MotoGP rider Pol Espargaró (Repsol Honda) confessed this Wednesday that he is “looking forward” to his season “getting back on the right track” at the third Grand Prix, which is being held at the Termas de Rio Hondo circuit, after an “end difficult week in Indonesia”, where he finished in 12th place with four points.

“I’m looking forward to getting our season back on the right track after a tough weekend in Indonesia, but that’s over and now we’re focused on the future. We’re close to the championship leader and the goal is to have a weekend like that of Qatar. Here in Argentina I have had consistent results and we know what the Honda can do this year. It is time to continue working and show our potential,” Espargaró said in statements provided by Repsol.

Read:  Nakagami dominates the first test for 2022 in Jerez in Raúl Fernández's debut in MotoGP

The Spanish rider will face the next two Grand Prix on the American continent and will try to continue with his positive start to the season. Since arriving in the premier class, Pol has contested six races in Argentina, finishing in the top ten five times.

Read:  Jack Miller: "I have become an asset for Ducati"

Bradl has competed three times in Argentina in MotoGP, scoring points in every race.

“I’ve already done some testing this year, so I’m familiar with the new Honda RC213V, but of course coming to a MotoGP weekend is a different situation. I have good memories of Argentina; I was fifth there in 2014 and seventh when I raced. for the last time in Termas, in 2016. We will work with the team to define the plan for the Grand Prix, I have no doubt that it will be a busy weekend”, concluded the German.