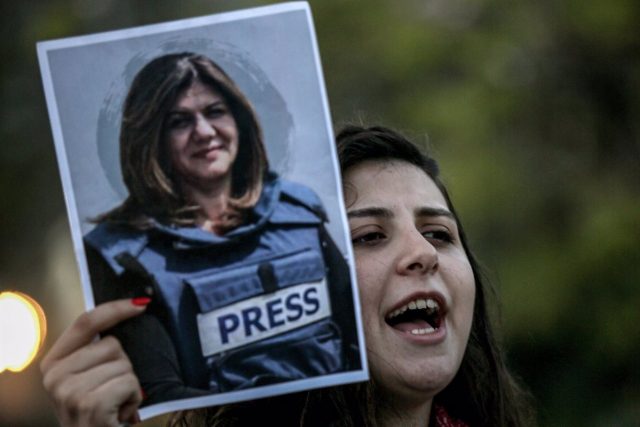 The family of American-Palestinian journalist Shirin abu Akle, who died in May after being shot during an operation by Israeli forces in the West Bank city of Jenin, has asked the U.S. government for a “meaningful response” to calls for justice in the case and have demanded a meeting with President Joe Biden to discuss the event.

Lina abu Aklé, niece of the journalist, who worked for the Qatari television network Al Jazeera, said after a meeting on Tuesday with U.S. Secretary of State Antony Blinken that “while he has made some commitments on Shirin’s murder, the Administration is still expected to respond meaningfully to calls for justice for Shirin.”

“Blinken has told us that he has a duty to protect all American citizens. We will hold him to it. Nothing short of a U.S. investigation leading to real accountability is acceptable and we will not stop until no other American or Palestinian family has to suffer the same pain we did,” he has stated through a series of messages posted on his Twitter social network account.

“We have conveyed to Blinken how important it would be to meet with the president of the United States. A meeting with him would demonstrate to our family that Shirin’s case is a priority for this Administration. Since he did not meet with us in Jerusalem, we have come to Washington. We need him to listen to us directly,” stressed Lina abu Aklé.

Read:  Truckers block access to Iquique in protest against crime in northern Chile

She also stressed that Blinken “is committed to transparency with the family from now on.” “We expect to be consulted and kept informed of every step,” she concluded.

For his part, Blinken has stressed that Abu Aklé’s “fearless journalism” “earned him the respect of audiences around the world.” “I have expressed my deepest condolences and commitment to seek accountability for his tragic death,” he has said on his Twitter account.

State Department spokesman Ned Price stressed at a press conference that Blinken has spoken “on several occasions” with Abu Akle’s family and disclosed that “in the most recent call, he invited the family to meet with him in Washington.” “The secretary deeply appreciates the opportunity to meet with Shirin’s family,” he explained.

“She was not only an American citizen, but a journalist whose courageous pursuit of the truth earned her the deep respect of audiences around the world,” he stressed, while stressing that Blinken would use the meeting to “reiterate the priority” of the United States on “accountability.” “This is something we will continue to discuss with our Israeli and Palestinian partners as well,” he added.

The United States said on July 4, following examination by its experts of the bullet that killed the journalist, that the projectile “probably” came from Israeli Army positions, although it stressed that it would be an “unintentional” shot. “It has not been possible to reach a definitive conclusion on the origin of the bullet that killed the Palestinian-American journalist Shirin abu Akle,” Price himself indicated.

In response, the Palestinian government rejected the U.S. report and claimed that the aim is to “hide the fact that an Israeli soldier committed the crime.” Thus, the Palestinian Foreign Ministry said that the Israeli government “bears responsibility for the crime” and regretted that the U.S. findings use “weak pretexts” to “allow the occupying country to evade its responsibility for the death of Abu Akle.”

The findings of the independent investigation conducted by the United Nations Office for Human Rights into the journalist’s death coincide with the assessment made by Palestinian authorities and which point to Israeli forces as responsible for the reporter’s death.

The findings of the investigation further dismantle the narrative that there was armed Palestinian activity in the vicinity of the position where the reporters were located, as Israel pointed out at the time. The Israeli Army admitted several days later the possibility that the journalist was shot dead by its own forces, but always unintentionally.