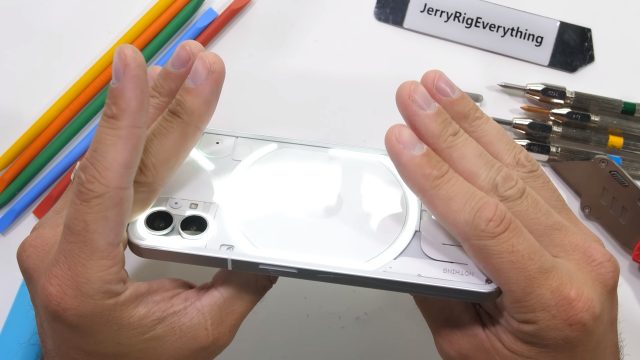 We’ve already learned that the Nothing Phone (1) is not very easy to disassemble and repair. The good news is that the phone is very sturdy, having survived an extreme test in which the rival OnePlus 10 Pro simply snapped in half.

Nothing Phone (1) looks like that kind of flimsy phone, the glass cover showing various decorative elements and the face dominated by the screen cut out from the contours of the casing having more to do with elegance and less to do with the features of a device designed to stand the test of time. Except, Nothing’s first flagship is exactly that, the OLED display coming with Gorilla Glass 5 protection and a perfectly flat construction, very well protected by the metal frame of the case. The same can be said for the glass back, perfectly flat and secured to the case chassis using strong adhesives.

Tested with the famous “bend test”, published on the JerryRigEverything YouTube channel, the strength of the Nothing phone (1) is unquestionable, the phone passing without obvious damage a test from which other pretentious products came out completely “shattered”.

The only weaknesses in the Nothing phone design (1) seem to be the “lines” for the antenna cut into the side bezel, but the phone is saved by very strong adhesives that allow the casing to flex without breaking. However, the clearly audible creaks during the experiment seem to indicate some internal cracking, most likely at the junction areas between the plastic elements and the aluminum chassis of the phone.

Apparently, the Nothing phone (1) was designed more after the example of Apple phones, aiming for a construction that was as sturdy as possible, but not necessarily affordable for eventual repair. PBK reviews gave it a repairability rating of 3 out of 10, mainly because of the difficulty of disassembly, the fact that there are no replacement components to buy, but also because in order to change many of the components you have to undo too many other items inside. The screen in particular is very hard to replace, requiring complete disassembly of the device.

The good news is that the Gorilla Glass 5 shield should prevent deep scratches, and the sturdy construction makes twisting/bending accidents (e.g. when sitting on the phone forgotten in your back pocket) unlikely.