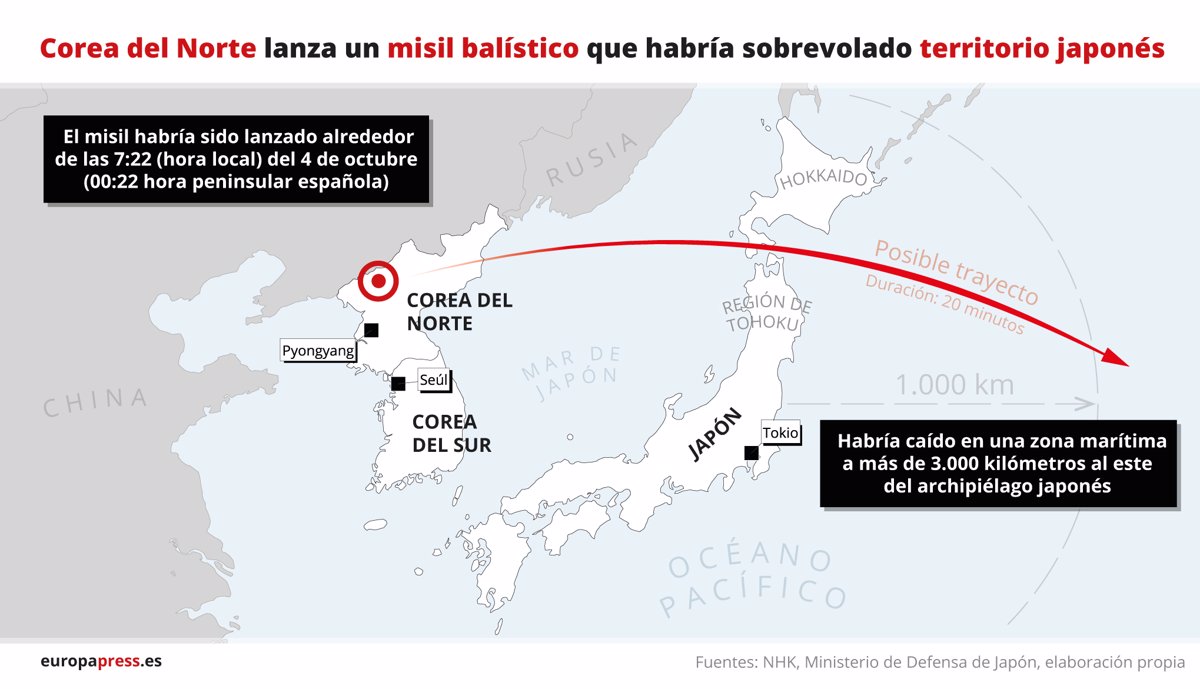 Pyongyang seeks to maintain its global relevance with the protection of Russia, China

In the midst of Russia’s invasion of Ukraine and in the face of a growing alliance between the United States and South Korea, Kim Jong Un has accelerated the consolidation of the North Korean ballistic program to confront what he has labeled as the “double standards” of the West.

With the launch of eight missiles in just ten days, Pyongyang has set off all the alarms in a new attempt to show strength after the visit of the US vice-president, Kamala Harris, to the South Korean territory, where she has taken the opportunity to underline the existing alliance between the parties.

Tuesday’s launch comes at a key moment for world geopolitics and has led the Prime Minister, Fumio Kishida, to speak of a “barbaric act”. The missile has flown over Japan and forced part of the population to take refuge, something that has not happened since 2017.

For Kim, however, the ballistic program is framed in self-defense, in the idea of “being ready to mobilize at full capacity” in case of external attack. The North Korean leader continues to accuse the United States of trying to “demonize North Korea” to justify its policies and insists that the measures taken by Washington against the country are purely “illegal and hostile”. Kim maintains that the attitude of the US country pushes North Korea, victim of “dangerous” actions that place it in a compromised place, to a step of the war conflict.

Gone is the attempt at rapprochement between Kim and former US President Donald Trump, ‘rara avis’ that succeeded for the first time in getting the North Korean authorities to offer an approximate deadline to achieve denuclearization and the dismantling of the nuclear arsenal.

After several meetings that augured progress, the 2019 summit in Hanoi brought the process to a sudden halt: the US administration refused to lift the sanctions imposed against North Korea, a requirement presented by Pyongyang to agree on an effective process of denuclearization of the peninsula.

Although the New York tycoon had suspended joint military exercises with South Korea, the talks were stalled. Now, with Biden at the helm, Washington has recalibrated its presence in the region, leading to new tensions. Under his administration, aircraft carriers such as the US Ronald Reagan have been deployed and precision bombing maneuvers have been conducted.

South Korean President Yoon Suk Yeol, who has increased resources for containment and preparedness for a possible North Korean attack, has been described by Kim as a “confrontational maniac who has gone far beyond any previous South Korean leader.”

Accused of being a gangster, Yoon is pushing forward a strategy that for many experts will only lead to the exacerbation of the arms race in the region and favors conflict because of a miscalculation.

The policies pushed by Yoon advocate for strengthening the alliance with the United States and give new meaning to the so-called ‘Kill Chain’, Seoul’s system designed to “raze” North Korea in a matter of minutes if necessary.

It is a three-pronged plan that includes an air defense system to take out the enemy’s ballistic missiles, a large-scale protocol to strike Pyongyang and a series of decisive strikes that would entail the death of the country’s top leaders, including Kim Jong Un. However, the idea lies mainly in preventing even the launch of the missiles in question from the North Korean side.

Last July, his administration announced the creation of a strategy command in the run-up to 2024 to oversee precisely this type of move after Seoul feared being abandoned by Washington during Trump’s tenure, which threatened to withdraw troops — more than 28,000 troops — from the area if South Korea did not pay millions of dollars in exchange for military support.

Although South Korea is considering tightening sanctions imposed against Pyongyang after the latest round of ballistic tests, the government is also vowing to strive for denuclearization, and the Unification Ministry has therefore urged North Korea to respond to Yoon’s plan and the offer of dialogue it entails.

Read:  The OSCE Office in the city of Mariupol in Ukraine is bombed

Kim himself has recently warned that he is prepared to test his nuclear arsenal in the event of a war with the United States and South Korea. To this end, he assures that the North Korean forces are “fully prepared to respond to any crisis.”

“Our nuclear capabilities are ready to be mobilized with full power in accordance with the purpose for which they were created,” he stresses in relation to measures that defy the sanctions and prohibitions of the United Nations Security Council against the Asian country.

Already in early September, Pyongyang passed a law declaring itself a nuclear state, while Kim said he felt under pressure and ruled out the possibility of talks or agreements on abandoning the nuclear program.

Despite the threat of sanctions, Pyongyang conducted six nuclear tests between 2006 and 2017. South Korean intelligence now believes that North Korea plans to conduct a nuclear test between October 16 and November 7 at Punggye Ri, where it has a tunnel and facilities prepared for such a test.

Kim Yo Jong, the sister of North Korean leader Kim Jong Un, has already rejected outright in August an economic aid plan offered by the South Korean government in exchange for denuclearization measures, which she called “the height of madness.”

In this situation, South Korean officials have already warned that South Korea intends to “respond forcefully” to the latest North Korean “provocations.”

There are many who point out that the detonation of a nuclear weapon would turn the tables and would even provoke a response from Washington, which would not stand aside, although everything points to the fact that Pyongyang is seeking for the moment to maintain its global relevance despite its weaknesses thanks to the protection of actors such as Russia and China.