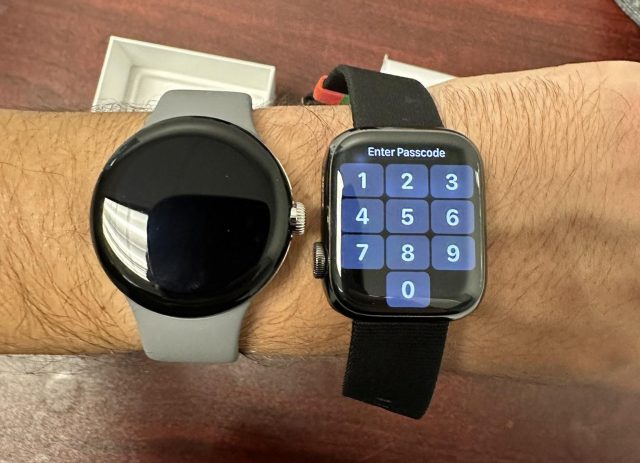 The Google Pixel Watch will be officially announced very soon, but already images of the final product have hit the internet. Apparently Google has already sent the “demo” units to stores and those who have access to them have taken photos of them and posted them anonymously on Reddit. There are already size comparisons between the new Pixel Watch and the Apple Watch, revealing the hardware and design differences between the two models.

The Pixel Watch is one of the most “well-rounded” smartwatches on the market. Most adopt designs closer to those of traditional watches, but Google has chosen to cover the front of the watch with a round, curved piece of glass that extends almost halfway down the watch. And Apple has over time modified the glass around its square display to curve as far as possible towards the edges. The only obvious button on the Pixel Watch body is the digital crown, but a photo of the back reveals another button above it on the side. The back of the watch appears to include health-monitoring sensors, but we only see four areas that can be illuminated, compared to the eight that most recent Apple Watch generations have. In terms of size, the Pixel Watch appears to be similar to the “small” 41mm Apple Watch, but on the round format.

Incidentally, both seem to offer pretty much the same features: heart rate monitoring, pulse oximeter, ECG, GPS, NFC, Bluetooth and Wi-Fi. There will also be a “cellular” version with integrated 4G modem. The 300 mAh battery won’t win any battery life contests. Expect 24 hours of battery life under normal use, compared to the 18 hours Apple claims for the Apple Watch SE and Series models. Like Samsung’s last two watch generations, the Pixel Watch will run WearOS. Unlike the Galaxy Watch, it will be equipped with Fitbit technology. This appears to be the second step in Fitbit’s integration, after it recently began directing watch and wristband users to ditch Fitbit accounts in favor of using Google accounts.