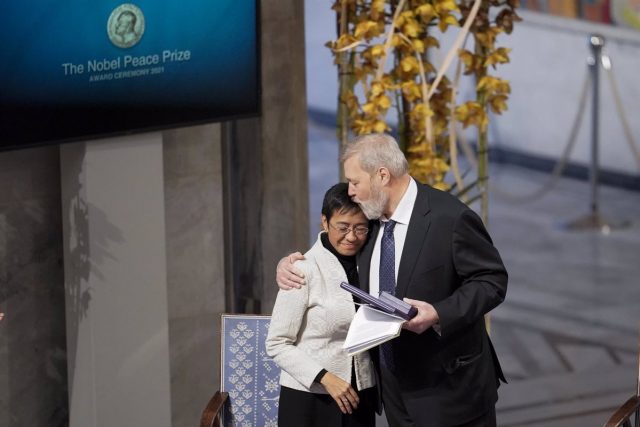 The Nobel Peace Prize will recognize this Friday the work of the person or organization that will succeed journalists Maria Ressa and Dimitri Moratov, in a year marked by the war in Ukraine and its collateral effects around the world.

The nomination process ended on January 31, before the Russian President, Vladimir Putin, gave the order to begin the invasion of the neighboring country on February 24, but among the favorites there are once again human rights defenders in opposition to Moscow and similar governments.

The director of the Peace Research Institute of Oslo (PRIO), Henrik Urdal, places the Belarusian oppositionist Svetlana Tikhanovskaya, the main dissident of Alexander Lukashenko’s regime, and also Alexei Navalni, currently imprisoned in Russia, at the head of his particular list of candidates.

“Both Tikhanovskaya and Navalni are prominent critics of the Russian invasion of Ukraine. A Nobel Peace Prize shared by both would be seen as a clear protest to the Russian aggression and assistance provided by Belarus and as support for democratic, non-violent alternatives to Lukashenko and Putin,” Urdal has argued in a recent statement.

Nearly 40 European politicians demanded in March in a joint letter to the Norwegian Committee to reopen the nomination deadline to bring in Ukraine’s President Volodimir Zelenski, in a call not, however, seconded by Stockholm International Peace Research Institute (SIPRI) director Dan Smith.

Smith has recalled that “perhaps” in future years Zelenski may be an option, “if he brings peace to the country,” but not this time. “The war goes on and that’s a fact,” he explained, in an interview to Europa Press in which he has raised some other options for the Nobel in the making.

The head of SIPRI has admitted that, while other years “it is difficult to know who will get the Nobel Peace Prize because there are many very good candidates,” in 2002 “there has not been much peace.” He does not rule out that the Norwegian Committee will take into account the Ukrainian factor, but he anticipates that it will not be by awarding the prize to a politician as outstanding as Zelenski.

One possibility “linked to the Ukrainian war” would be, in his opinion, to recognize the work of the International Atomic Energy Agency (IAEA), which has campaigned for non-proliferation and worked on the ground to prevent a nuclear disaster in plants such as those of Chernobyl or Zaporiyia, the latter still militarily occupied.

The agency already received the award in 2005, but this would not be an impediment under the award regulations. The International Committee of the Red Cross (ICRC), for example, has been recognized three times with the award.

Smith also agrees with Urdal in his pool by singling out peaceful dissidents such as Tikhanovskaya as recognition of “democratic opposition” to Lukashenko and the fact that, had he consummated his victory in the 2020 elections, “perhaps the situation would be very different.” Recognizing Tikhanovskaya, explains the SIPRI director, would be rewarding “an ally for peace”.

Smith introduces as a third way environmental activists, without naming names. The young Swedish Greta Thunberg has been a recurring presence in bookmakers over the last few years, but traditionally the Nobel Prize usually awards prizes to several people when it comes to focusing on such a global challenge as climate change.

For his part, the PRIO director adds next to Tikhanovskaya and Navalny the International Court of Justice (ICJ), a symbol of peaceful conflict resolution, as well as Indian activism represented by Harsh Mander and the Karwan-e-Mohabbat campaign, if the Norwegian Committee would like to recognize the fight against religious extremism on this occasion.

Another option is to put China back in the spotlight by awarding the Uyghur economist Ilham Tohti or the Hong Kong activists Agnes Chow and Nathan Law, while as a fifth option Urdal raises the potential recognition of the Human Rights Data Analysis Group (HRDG) and the NGO CANVAS, which advocates nonviolent resistance.

For the 2022 edition, 342 nominations have been submitted, of which 251 are for individuals and 92 for organizations. The rules of this prestigious award do not set any limit to the number of candidates, which is why dictators such as Adolf Hitler or Benito Mussolini have been included in the shortlist.

It is up to the members of the Committee to discriminate among the long list of candidates, which in 2022 have reached the second highest number in history, only behind the record of 376 reached in the 2016 edition. The names are secret until after 50 years, but disclosure by those submitting nominations is not prohibited.

The winner will receive 10 million kronor (more than 917,000 euros), usually redirected to the cause recognized by the Norwegian Committee. Muratov, a Nobel Peace Prize winner in 2021, even decided to auction the medal that accompanies the award to donate the money raised to children displaced by the conflict in Ukraine.