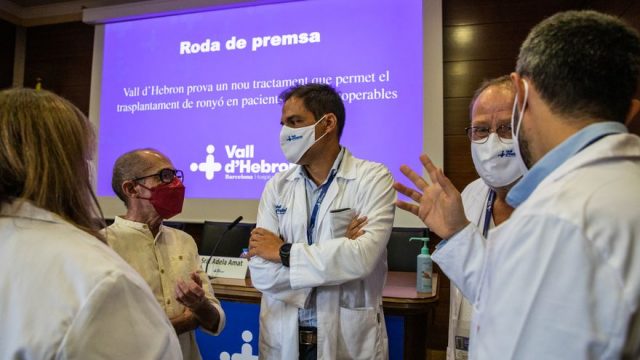 A novel treatment enables kidney transplantation in patients who were hitherto inoperable and who had been carrying decades on dialysis. The Vall d’Hebron Hospital, in Barcelona, is the center that has treated the first patient in Europe who has been treated with this drug, called imlifidase, and who has subsequently been successfully transplanted. “It’s a big change after 35 years on dialysis. This is a beam of hope for patients like me,” he said Thursday. Michelangelo, the patient. “Now I have a life without dialysis, with freedom and I feel better than I did before,” said this man. 54 years old who had been on dialysis since 1984. Miguel Ángel underwent two unsuccessful transplant attempts: in 1991 and 1996. Now, he assures, his life is different.

“Now I have a life without dialysis, with freedom and I feel better than before,” says Miguel Ángel, the 54-year-old patient transplanted three months ago

The case of this patient, who was transplanted three months ago, is included in a phase three clinical trial which seeks to demonstrate the efficacy of imlifidase. It is expected to be approved shortly by the European Medicines Agency (EMA). The drug is indicated for people with a hyperactivated immune system and therefore cannot be transplanted.

Imlifidase “improves the quality of life and is. cheaper than dialysis.” as emphasized by Dr. Oriol Bestard, Head of the Nephrology and Renal Transplant Service at Vall d’Hebron. Bestard estimates that approximately 30,000 Catalans. “In Catalonia, there are 200,000 people on the waiting list, but between 10% and 15% of them cannot be kidney transplanted,” he said.

In persons with a hyperactivated immune system there is a excess of antibodies in the blood against most antigens of the human leukocyte antigen (HLA) system of the population, which is expressed by the cells of the different tissues of the organism and marks whether an organ may be a match for a particular patient. Therefore, in the event that a transplant were to be performed, it would result in a rejection of the organ in a rapid and practically irreversible manner. That is why these patients have a extremely low probability of finding a donor match.

Read:  Madrid reactivates Zendal due to emergency room saturation with flu and other viruses

Imlifidase, which is introduced intravenously, could be a therapeutic alternative for patients with end-stage renal disease

What this new drug does, which is introduced by intravenous route, is to eliminate the antibodies and therefore could be a effective therapeutic alternative for patients with a end-stage renal disease, Who are destined to remain on dialysis for many years. “This treatment is about a molecule that eliminates the antibodies and this offers a new possibility: during a time of five or six days after treatment, we can accept an offer [de órgano] and go to the operating room. The effect of the drug is immediate and lasts five or six days,” Bestard explained. The drug can only be used once in the patient, since afterwards “the organism generates antibodies against this molecule”.

According to this physician, the effect of this treatment can be. “beneficial” also for many other diseases. “There are studies in different diseases outside of transplantation. And this option is also being considered as a rejection salvage, that is, in patients who develop a acute rejection of the transplant.” has said.

Kidney transplantation is the treatment of choice for patients with end-stage renal disease. The transplanted organ has a median survival rate of about 15 years and, therefore, especially in the younger patients, a new transplant will often be necessary in the future.

Saving the lives of these patients requires a very high level of specialization, as well as a great deal of multidisciplinary coordination

“In those cases in which there has already been a previous transplant, especially if it has been lost due to chronic rejection, or in women with previous pregnancies who have allowed contact with biological material from other individuals, the patient’s immune system is more activated than usual and this generates a repertoire of specific antibodies that persist over time. [la llamada memoria inmunológica]. This can lead to a rejection very quickly. if the patient is transplanted with an organ expressing previously recognized HLA antigens,” said the Head of Nephrology at Vall d’Hebron.

However, there are patients with such high antibody levels that, despite being prioritized at regional and state level to receive organs, they are unable to find a compatible one. No drug, until the arrival of imlifidase, had been effective for transplantation. Previous studies in the United States and Sweden carried out with this treatment in small groups of patients have shown positive results. up to three years later after surgery.

Saving the lives of these patients requires a level of expertise of the equipment, as well as a very high level of multidisciplinary coordination between nephrologists, immunologists, urologists, transplant coordination and a highly specialized nursing team. “This type of patients are quite complex also from the surgical point of view, since they have a biological age that does not generally represent the chronological age. because he has been on dialysis for so many years,” he said. Enric Trilla, Chief of the Urology Service of the hospital. That is why it requires a lot of “surgical expertise” in the field of transplantation.