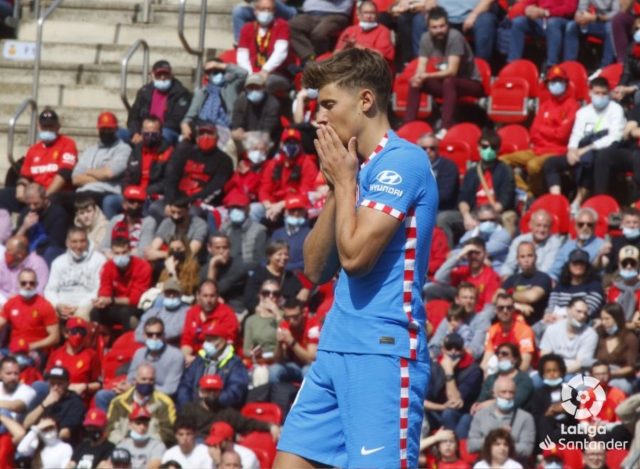 A penalty goal from striker Vedat Muriqi has punished Atlético de Madrid this Saturday at the Visit Mallorca Estadi (1-0) and has allowed RCD Mallorca to leave the relegation positions of LaLiga Santander, all in a rare match for the rojiblancos, that they join in the uncertainty a few days before the second battle against Manchester City and that they see how fourth position, the last access to the ‘Champions’, could be in danger.

With an inconsequential Luis Suárez instead of Joao Félix, the rojiblanco team was unable to create danger against a rival more harassed by emergencies, and not even the reaction of ‘Cholo’ after the break prevented the defeat, a new failure of the colchoneros against a team from the lower zone.

A free kick by Mozambican defender Reinildo Mandava in the 66th minute was enough for Javier Aguirre’s side to take advantage of one of their rare chances with a penalty that Kosovar striker Vedat Muriqi masterfully converted.

With this, Diego Pablo Simeone’s men (57) interrupt a series of six consecutive victories in the domestic competition and already feel the encouragement of Real Betis (56), who long for fourth place and who are already just one point away thanks to their comeback in Cadiz (1-2). Those of ‘Vasco’ Aguirre (29), meanwhile, managed to get out of the burning zone.

Read:  Marc Márquez: "The information from the test has been good"

A mistake by Koke as soon as the clash began was about to lead to the goal of the locals, spurred by the defeat of the Cadiz minutes before and sure that a victory against the red and white team would allow them to sleep out of relegation; Muriqi fired from the edge of the box and the ball sailed close to the left post.

Marcos Llorente responded shortly after in an action in which he finished off alone inside the area, although the vermilion defense disrupted the danger of an Atlético that was fading away. It was a mirage in a first half in which hardly anything happened in both areas and in which not even a shot on goal was recorded.

As soon as the clash resumed after passing through the locker room, Oblak stretched to avoid Mallorca’s first goal with a stretch to a great shot by Brian Oliván. Previously, Simeone had already moved the bench to bring on Matheus Cunha and Thomas Lemar in search of reaction.

In the 50th minute, Rodrigo de Paul tried his luck from the edge of the box with a shot that went over the crossbar, and just a few minutes later Suárez headed it without much intention and Sergio Rico caught the ball without any problems.

Read:  Liverpool and Bayern, to rooms by different paths

Another header from Muriqi after a free kick alerted the Atletico goalkeeper, who soon after became judge of the contest when Reinildo stepped on Maffeo inside the area and the referee awarded a penalty. The Kosovar was planted before eleven meters and resolved with a shot to the right corner well beyond the reach of the Slovenian goalkeeper (min. 68).

Thus, the rojiblancos are loaded with doubts for the second leg of the ‘Champions’ quarterfinals at the Wanda Metropolitano, where they need to come back from 1-0 in the first leg at the Etihad Stadium.