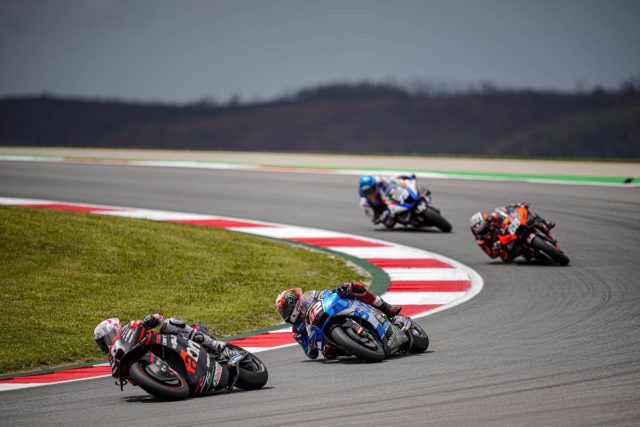 This weekend the Motorcycle World Championship will have the first of its four events on Spanish soil, the Spanish Grand Prix to be held at the Jerez-Ángel Nieto Circuit and to which Alex Rins (Suzuki) and Aleix Espargaró (Aprilia) arrive with options to emerge as leaders in MotoGP, and with Sergio García Dols (GasGas) defending the lead in Moto3.

After five rounds of the championship, there is still no clear dominator, except in Moto2, where the Italian Celestino Vietti (Kalex) has already amassed a good advantage, while the ‘queen’ category continues with its ‘instability’ and now, despite After a start full of problems, the current champion, the French Fabio Quartararo (Yamaha), is leading, yes, tied on points with Rins.

As was to be expected after what had happened in the previous races, the Portuguese Grand Prix, aided by complicated conditions, offered a different scenario than that of Las Américas, although it did show some things such as the problems of the Repsol Honda and the official Ducati, which the Suzuki seems theoretically the most ‘regular’ bike at this start despite not avoiding problems and that Quartararo is getting the most out of his ‘M1’.

The man from Nice added his first victory of the season in Portimao and the first since the British Grand Prix last August to strengthen his spirits and continue opening the gap with riders such as Marc Márquez and Francesco Bagnaia, his theoretical main rivals and who now they are not.

Quartararo, who has 69 points, arrives at a Cadiz track that he dominated in the two races that took place in 2020, and where he could not be in the ‘Top 10’ in 2021 due to his problems with compartment syndrome, dominated by the Desmosedici of Jack Miller and Francesco Bagnaia, already forced to react and look more regularly ahead.

The Australian and the Italian add 31 points, the same as Marc Márquez who cannot find the key to put the Honda in the fight for the podium. In Portugal he repeated Austin’s sixth place, although with different sensations compared to the great comeback in the COTA, and now he returns to the ‘scene of the crime’ since it was in Jerez that he suffered the shoulder injury that has caused so many headaches dice.

In any case, the eight-time world champion has won three times in the Cadiz circuit and hopes that racing at home will also give him a plus to start feeling competitive and not give up any more ground in the fight for the title. His teammate Pol Espargaró will also want to shine, who is also suffering at the start of the season despite his third place in Qatar.

None of these four is in the current fight for the lead, which is up to Alex Rins, who is tied with Quartararo, and Aleix Espargaró (Aprilia), who is three away, so both aspire to come out on top to confirm its good start.

The man from Suzuki also arrives in good spirits as he was able to go from 23rd place on the starting grid in Portugal to finish fourth, while the man from Granollers continues to be one of the revelations together with Enea Bastianini (Ducati) and showed that the Italian brand is serious after being third in Portimao, and now it will try to be more regular to strengthen its candidacy.

Jerez will also be important for Joan Mir (Suzuki), who is being regular, but who went down in Portugal due to a touch from Jack Miller when he was trying to fight for a podium that would have placed him higher than he is now, 20 points.

On the other hand, in the Moto3 category, the leader is Spanish thanks to the figure of Sergio García Dols (GasGas), who will have to defend this privilege before his public from the threat of the Italian Dennis Foggia (Honda), located just a point.

The man from Castellón proved to be a candidate for the title with his second victory of the season in Portugal, which was accompanied by the ‘help’ of the current runner-up, who could only add eight points and gave up his leadership. Jaume Masiá (KTM) maintained his progression and after his victory in Austin, he was second in Portimao, although he needs to continue adding podiums because he is still far from the top, 29 points.

Finally, where there is less ’emotion’ so far at this start of the championship is in the Moto2 category where the Italian Celestino Vietti (Kalex) continues to be the leader, who recovered from his ‘0’ in the GP Las Américas with his fourth podium of the year thanks to a second place last weekend.

Vietti already has 90 points, more than any other driver in this World Championship, and he is also seeing how his rivals are not regular. The Japanese Ai Ogura (Kalex) and his compatriot Tony Arbolino (Kalex) did not add anything and are very far away, as is the Spanish Arón Canet (Kalex), who left empty for the second consecutive date after being involved in the multiple fall from the start of the race and that the radius was fractured, which will not prevent him from being in Jerez.