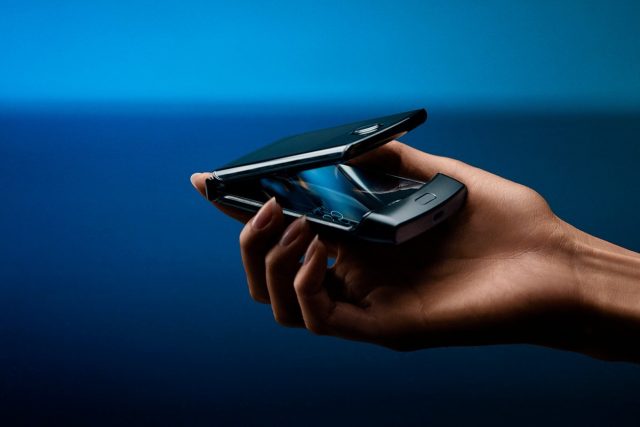 Motorola was one of the first manufacturers to launch foldable phones a few years ago, but its plans in this market segment have stalled. After two successful launches in the RAZR series, Motorola seems to have taken a break. However, it seems that in the near future we may receive a new model in this series, Motorola RAZR 3, with a changed, more modern design, which seems to be inspired by the competition.

91mobiles has published in partnership with “leaker” Evan Blass the first two photos with what appears to be a new Motorola RAZR. The third-generation phone, however, abandons the “classic”, square design lines, inspired by RAZR phones from the early 2000s, in favor of a more modern shape, with rounded edges. In fact, at first glance, the phone looks a lot like a Samsung Galaxy Z Flip3, especially in the area of ​​the cameras on the outside, but also on the inside. That’s because the RAZR 3 seems to use a two-camera system positioned the same as the Flip models, in a corner, not the center, as we saw earlier on the Motorola RAZR models. Then the internal screen gives up the “notch” and the “chin” at the bottom, in favor of a foldable screen without interruptions and without a fingerprint sensor at the bottom. The front camera is integrated in a “hole-punch” as we see on most phones in recent years, and the fingerprint is in the power button.

The phone hardware will be high-end

At the level of hardware specifications, we are talking about a high-end phone, for the first time in this series. The processor is a Snapdragon 8 Gen 1, which could be replaced with a Snapdragon 8 Gen1 +, if it is available when the phone is launched. Hardware configurations with 8 or 12 GB RAM and 256 or 512 GB suggest that we are dealing with an expensive phone. We will see other upgrades in the cameras, which will integrate sensors of 50 and 13 megapixels, respectively, for wide and ultra-wide. However, the screen remains a Full HD + one.

Read:  Honor announced Magic OS 7.0 based on Android 13. When does your phone get the update According to 91mobiles, the Motorola RAZR 3 could be launched either in July or August, so the wait will not be very long. As Motorola is now a brand of the Chinese company Lenovo, the phone could debut in China before being launched in Western markets.