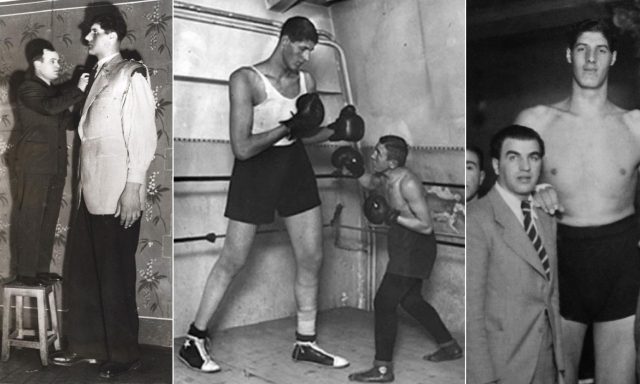 Gogea Mitu is the tallest and most controversial boxer in the history of Romanian sport. However, his name is not known to many, and his mysterious death has not been explained to this day.

The boxer was considered in the last century a great hope of the world in the ring. He arrived in the United States at the beginning of the last century, and the local press presented him as the tallest boxer in history, with a height of 2.42 meters.

On his real name, Gogu Ștefănescu was born on July 14, 1914 in Mârșani, a commune in Dolj County. He was part of a family with 11 children, but he suffered from gigantism. One of his brothers passed away at the age of 7, measuring 1.80 meters.

When Gogea Mitu was only 10 years old, he no longer fit in the school bench. At the age of 17 he was already 2.20 meters tall and often went on world touring with the circus. The press of those times called Gogea Mitu “the tallest man who ever lived in Romania”.

Read:  RCA capping, more useless than you think: why you will pay more, what are the criteria, the reference rates

He was already known as the “Goliath of Romania”. At a fair in Obor, he was spotted by Umberto Lancia, an Italian boxer who helped him get to Paris, where he would learn to box. His first match took place on the Venus arena in Bucharest, winning by a knockout.

This was just the beginning, with matches to be played in Italy and France. At the time, Mitu was considered the tallest man in the world. In 1935, Mitu received an offer from an American company to fight for professionals.

At just 22 years old, in 1936, after returning from Istanbul, Mitu began to feel unwell. He was hospitalized in Bucharest, and a few days later, on June 9, he died. The diagnosis showed that he had a complication of tuberculosis, a disease from which he suffered from an early age.

Relatives found him in the basement of the hospital, ready to be embalmed. Although the official variant is tuberculosis, it is suspected that he was given lethal injections. Another theory about his death is that he was killed by the betting mafia due to the fact that the giant managed to win against all his opponents, so there was no show.

What is certain is that the death of the great boxer remains shrouded in mystery. Its skeleton can be studied by medical students from Craiova. Also, one of the streets of Mârșani commune is named after the former boxer.