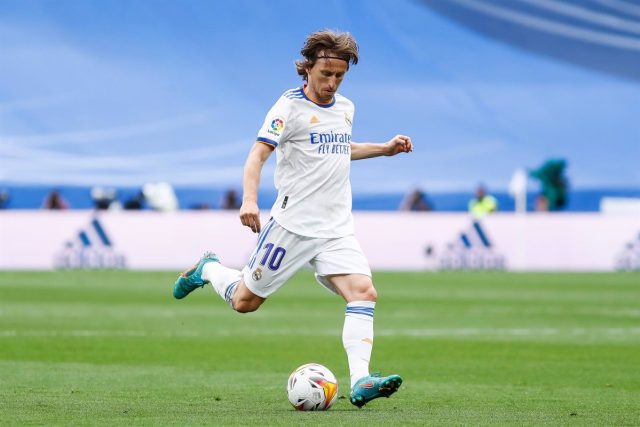 Real Madrid midfielder Luka Modric showed “a lot of confidence” this Tuesday for Wednesday’s first-leg semi-final match against Manchester City, highlighting that the “environment in the locker room is very good” before the “most important match in the season”, to which they have arrived “not only with luck”.

“That they continue to think what they want, to get here and be in so many semifinals and play so many Champions League finals is not achieved by luck alone,” Modric said at the press conference prior to the duel against the English this Wednesday (9:00 p.m. hours).

The Croatian sees it as “unfair” that there are people who allude to fortune to argue the whites’ progress in the competition. “It makes us laugh a little, but everyone can say what they want, we are concerned about what we do. To get where we are and win everything we win, you have to have something else, you have to have character, quality, faith and this makes us great and win important things for this club”, he explained.

Modric sees a “very good atmosphere in the locker room” ahead of the European duel at the Santiago Bernabéu. “We know what we have to do, we know that it is the most important game of the season and we have to play our best game. Hopefully we will be in the final,” he said.

On the possibility of turning the tie around, the Croatian was optimistic. “Of course we are very confident, that we can come back from the game because we know that in the first duel we didn’t play our best game and even so we scored three goals,” he commented, although he acknowledges that tomorrow they have to “do better and see if it’s enough to be in the final”.

“We have character, we have quality, the history of this club also plays out. All these things have a great influence, we know what we have to do whenever we go out on this pitch with the people behind us and these things are the things that make us so strong, never give up, it’s what this club has taught us that is done here”, explained Luka Modric.

The Ballon d’Or winner believes the key is to “play a complete game” both defensively and offensively. “We are aware that we have to do much better in all aspects of the game,” he said, although he trusts his team, because “when things got difficult” they did not stop believing and that is what they have to do against Manchester City.

For Modric, the return of Carlos Casemiro to midfield after missing the first leg is important. “He’s an important piece for our game. He’s fundamental and it’s very nice to have him with us again, I’m sure he’s going to help us a lot to correct the mistakes we have”, assured the Real Madrid footballer.

The midfielder did not dare to say if Manchester City was the best team they have faced this season, where they have faced “great teams like PSG and Chelsea”, so he sees tomorrow’s rival as “a great team with great players” but he doesn’t know “if it is the most difficult”.

Modric believes that they need to involve the public in the game so that it gives a boost to the work of the players on the field. “What we have to do is go out on the field with a lot of faith, with a lot of responsibility, with a lot of energy and aggressiveness,” he explained. “We are Real Madrid, the best team in the world and those are the things we have to put on the pitch tomorrow,” added the Croat.

The previous experience in the competition is something that Luka Modric also values ​​as something positive. “Surely this is an important aspect, it is nice to remember that we have already won four Champions Leagues and that some of us have the possibility of reaching the fifth”, he affirmed, although he acknowledges that “years have passed since the last one” won and that tomorrow we have to forget about it and focus on the game.

“WE HAVE TO DO OUR BEST MATCH”

Regarding the celebration of the league title, Modric assured that he “very much wanted to go to Cibeles”. “We have enjoyed a lot, we were very happy to be with our fans and since it finished we were focused on tomorrow’s game”, he commented, because “the season is not over”. In addition, he wanted to thank the fans for their help, as he says that the team has managed to overcome “this year’s difficulties thanks to their support.”

The Croatian did not want to enter into controversy about the hypothetical corridor of honor of Atlético de Madrid this weekend, assuring that it is a matter that does not interest them and that it makes no sense to talk about it “before such an important game”.

“If it is my best year that others judge it, what I can say is that I am happy with my performance this season but there are still some challenges ahead until the end of the season,” explained Modric, who likes “to have responsibility inside and outside of the field”. “I have never avoided having her, I always love being there, helping my teammates,” he said.

Modric also had good words for his teammate Rodrygo, whom he defined as “a very humble boy with both feet on the ground” who “is helping the team when he plays and when he comes in”. “We have a very good relationship and I think he has said that we are ‘father and son’ because his father is my age and he thinks he has to listen to me,” he explained with a laugh.

About Ancelotti, Modric affirmed that he is “one of the greatest coaches in the history of this sport”, for which he acknowledges that the dressing room is very happy to “have him back” because they won important things with him in the past and now they want repeat it Of the Italian coach he highlighted “his way of being” of him.

“With a very natural way he has returned and the faith he has put in us, in the whole team, meant a lot to us,” he concluded.