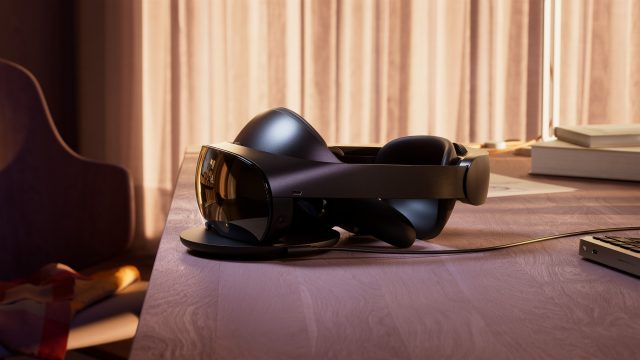 The Meta company has announced the new Quest Pro, the third device in its series of standalone virtual reality headsets. After two Quest models, dedicated to the general public and equipped with high-performance hardware at an affordable price, the new Quest Pro tries to refocus the product range also towards the premium and business area. With a price tag of $1,500, we would certainly expect a much improved experience, but the more than triple price of the Meta Quest 2 doesn’t seem fully justified.

On the hardware side, the Meta Quest Pro adopts a new Qualcomm Snapdragon XR2+ processor, a processor that promises 50% more performance than the Meta Quest 2 released two years ago. It’s even better cooled, and with 12GB RAM and 256GB storage standard, it should make a difference in most applications. The Quest Pro integrates both 5 external sensors for sensing the environment and 5 sensors inside, which monitor facial expressions, eyes and other important elements to transpose the user into the virtual environment.

In terms of the visual quality offered, however, the Quest Pro remains on LCD screens, as opposed to OLED. These have 37% better resolution than Quest 2 (37% higher pixel density) and use new “pancake” style lenses, which are significantly smaller than the Fresnel lenses in Quest 2, but offer 40% better clarity. The LCD screens also have local dimming, with 500 zones, providing 75% improved contrast and 1.3 times greater colour gamut. The lenses also offer a 25% larger field of view for more immersive experiences.

The external cameras on the Meta Quest Pro are now full color and allow the environment to be displayed on the device’s displays for those times when you need to do something outside of VR and don’t want to take the helmet off.

Although this device appears to be well equipped for gaming in VR, Meta presents it more as a productivity computer, allowing it to run specialized software such as Microsoft Office, or 2D and 3D creation software for users. Accordingly, the exterior design has been improved for increased comfort, from integrating a better lens gap adjustment system, to the grip system, which sits the device on the user’s forehead and grips the back of the head better. The areas that touch the head are made of soft, touchable foam.

Read:  OnePlus 10 Pro appeared in the offer of a European store, confirming the price

The accessories are also very expensive

Also new are the new Meta Quest Pro Controllers, a set of two devices equipped with advanced processors and sensors. They can also sense the environment and have a Qualcomm processor each integrated to process the data. They can also connect to the Quest 2, for example. However, the prices are extremely high. For 50% more performance and slightly better screens, the Quest Pro sells for $1,500, compared to $400 for the Quest 2. Both devices include the corresponding controllers in the package. Separately, the Quest Pro controllers cost $300 US, while Meta doesn’t offer much in the way of bundled accessories beyond a charging dock.

Accessories such as headphones, a protective carrying pouch, or a system that completely blocks outside light can cost between $50 and $120 extra. For a device that has a battery life of about two hours, these prices aren’t very justifiable, especially when you consider that in two years, performance has increased by only 50%, with internal components still similar to a smartphone.