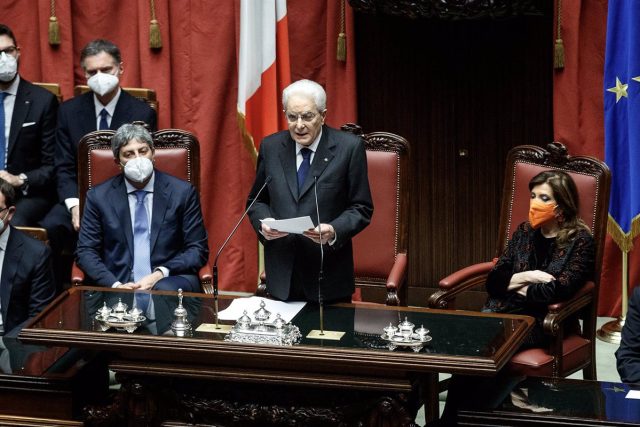 Sergio Mattarella has sworn this Thursday his second term as president of Italy with a call for “common commitment” to make the transalpine country “stronger”, after agreeing to hold the head of state by the consensus reached by the majority of the parties Italians and despite his declared intention to leave office.

Upon his arrival at the Montecitorio Palace, which houses the headquarters of the Italian Chamber of Deputies, Mattarella was applauded and cheered by all the groups present in the hemicycle. “I swear to be faithful to the Republic and to loyally observe the Constitution”, said Mattarella, after which another intense applause took place in the chamber.

The president began his speech by highlighting the “unexpected novelty” that holding the Italian Presidency again means, but he appealed to “responsibility”. Thus, he has made reference to the fact that Italians expect a “guarantee of rights, tranquility, support and concrete answers to their anxieties”.

In his opinion, the expectations of the Italians could have been “strongly compromised” by “the prolongation of a state of deep political uncertainty and tensions, the consequences of which could have endangered even decisive resources and the prospects of relaunching the country committed to leaving of a condition of great difficulty”.

This is the “awareness” with which he received the result of the vote that has brought him back to the head of state and “this same awareness is the reason” for his “yes” and “will be at the center” of his ” commitment”, he said, before emphasizing that “these were turbulent times for everyone, including me”.

Read:  Tories set July 21 as deadline to narrow down to two candidates to succeed Johnson

“When the presidents of the Chamber of Deputies and the Senate informed me of the result of the vote, I spoke of the emergencies – health, economic and social – that are challenging us. We cannot afford delays or uncertainties,” he indicated.

Mattarella has alluded to the COVID-19 pandemic as one of these “emergencies” and has specified that “the fight against the virus is not over”, while acknowledging that, although the vaccination campaign has greatly reduced the risks, do not “neglect” the disease.

In this sense, he urged “designing and starting to build post-emergency Italy” and considered that “there is still time for a common commitment to make Italy stronger, beyond the difficulties of the moment”. “A fairer, more modern Italy, closely linked to the friendly peoples that surround us”, he continued.

In an international key, Mattarella has shown himself against “accepting that now, without even the pretext of competition between different political and economic systems, the winds of shocks will rise again in a continent that experienced the tragedies of the First and Second World Wars “.

“We must appeal to our resources and those of our allied and friendly countries so that the demonstrations of force give way to mutual understanding, so that no people fears the aggression of its neighbors,” he indicated, according to the Italian newspaper ‘Il Messaggero ‘.

The President of Italy has also acknowledged that the government of Prime Minister Mario Draghi “is intensely committed to all these issues, both internally and internationally”. Thus, he has praised the Italian Executive and has remarked that “it was born with broad parliamentary support in the midst of the emergency and now it is projected to overcome it, laying the foundations for a new season of sustainable growth for the country and Europe”. For this, he has expressed his “heartfelt thanks and best wishes” to Draghi.

Mattarella obtained 759 of the 505 votes necessary to be elected, with which he became the second president with the most support after the 832 votes obtained by Sandro Pertini in 1978. The question of re-election was cleared up in the middle of the afternoon on Saturday and after a week of uncertainty “If necessary, here I am,” he said after a meeting with Italian political leaders.

This new mandate, in theory, will facilitate the stay of the deputies until the general elections of 2023 and Draghi will continue as head of the Government, with the confidence of a president whose powers are basically ceremonial, although they have the responsibility of nominating the prime ministers and to your cabinets.