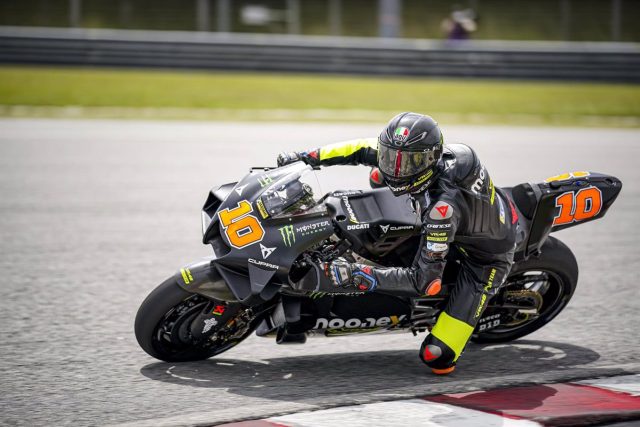 The Italian rider Luca Marini (Ducati) was the fastest this Saturday on the second day of the MotoGP pre-season test at the new Mandalika circuit, ahead of Marc Márquez (Repsol Honda) who took a step forward and of a Maverick Viñales (Aprilia) who has completed the ‘podium’ of the day.

With a time of 1:31.289, Valentino Rossi’s brother led -with GP19 instead of GP22- Ducati’s step to the front, which placed 5 of its 8 riders in the ‘Top 10’, and surpassed by 0.192 thousandths to the eighth world champion, all in a day in which the rain did not disrupt the plans and in which records of 1:31 could be seen for the first time on the Indonesian track.

Read:  LaLiga transforms its marketing strategy with Microsoft and hundreds of terabytes of data

Those from Borgo Panigale also had four other riders in the top ten of the time table: Frenchman Johann Zarco, sixth; the Italian Enea Bastianini, seventh; the Spanish Jorge Martín, ninth; and the also transalpine Francesco Bagnaia, tenth. In addition, Fabio Di Giannantonio was once again the best ‘rookie’, seventeenth.

In Repsol Honda, Marc Márquez rode 74 laps and set his best time on his penultimate lap, while Pol Espargaró finished eighth, three tenths off the lead. Also riding a motorcycle of the Japanese brand, Takaaki Nakagami and Àlex Márquez were fifteenth and sixteenth, respectively.

For his part, Viñales finished third on the Aprilia RS-GP 2022, and Aleix Espargaró finished fourteenth after suffering a crash at turn 12. Meanwhile, Joan Mir led the Suzukis, fifth with the same fastest lap as Zarco, and Àlex Rins was positioned twelfth.

In Yamaha, the current world champion, the Frenchman Fabio Quartararo, rode 68 laps and placed first before Marini, Marc Márquez and Viñales beat his time, which condemned him to fourth place for the day. In KTM, Raúl Fernández was the second best ‘rookie’ of the day, twenty-first.