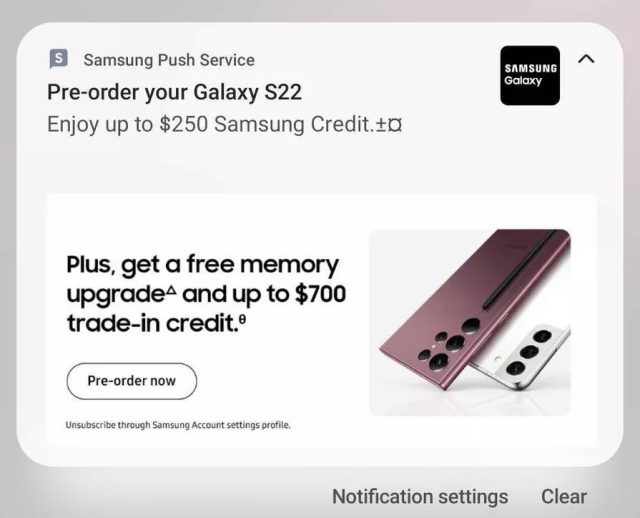 Although he recently promised to give up the habit of displaying advertisements for newly launched products on the devices of users who already use Samsung phones, the South Korean manufacturer arouses waves of irony by displaying these messages even for new Galaxy S22 phone owners.

Basically, unavoidable for Samsung phone owners, the notification messages announcing the launch of new Samsung phones tend to appear even on Galaxy S22 phones just out of the box. Thus, there may be hilarious situations in which the new owner of an S22 Ultra phone is encouraged to pre-order another copy of the Galaxy S22 series.

Although it seems a harmless coincidence, the fact that Samsung has no hesitation in forcing the display of ads on phones that have just reached consumers who sometimes pay over 1000 euros, is an act of defiance of their own fans. Like pre-installed applications, or proposed as shortcuts already present in the app drawer, ads delivered through Samsung Push Service only come to tarnish the premium-level experience portrayed in promotional materials.

Although we can assume that the display of promotional messages on newly activated S22 phones is in fact a mistake, the same cannot be said about the millions of Galaxy S21 users, or other Galaxy A models, most of whom are already aware of the latest in the Samsung universe.

Read:  vivo X80 with Dimensity 9000: the most powerful Android phone so far