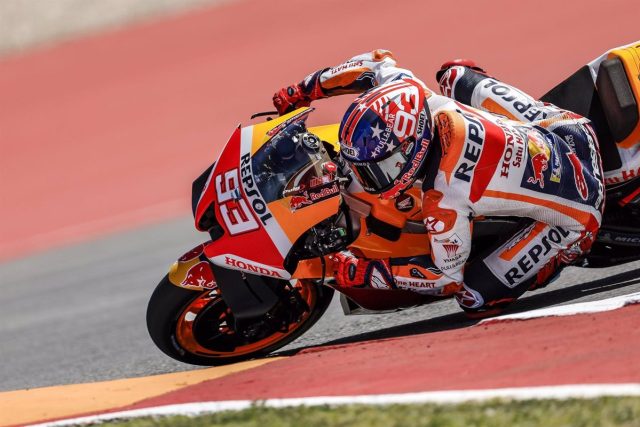 The MotoGP rider Marc Márquez (Repsol Honda) recognized that they still have to find the correct base of the bike on which to try to improve, so the test that will start on Monday at the Jerez-Ángel Nieto Circuit will begin, in his case, this Friday with the first practice sessions of the Spanish Grand Prix on the same track.

“We are in a different situation and my test on Monday starts tomorrow. We have to find the base of the bike, in the first place. The rest already have that base. And with that base in which we are comfortable, we will start testing new elements. “, he stated at a press conference.

Marc Márquez, without counting absences due to injuries, is suffering just like the rest of the Honda riders with a motorcycle that seemed to start from an improved base compared to that of 2021, but that in Portimao, for example, was not competitive at all. The one from Cervera, eight times world champion, is eleventh in this World Cup.

“In Portimao we were too far from the top, from the podium, and with many difficulties in the race. We are going to try to find a way to go faster here in Jerez, we have ideas to test. We will see how we start FP1 and from there we will start to understand our limit for this weekend”, pointed out the Catalan.

Of course, he predicted suffering in Jerez due to the type of layout, short and narrow. “In large circuits the bike is working well, but in small ones and where we have to turn in a short time it is difficult for us. If the solution is near or far we don’t know, the potential is there and we have to find a way to take advantage of that potential “, he detailed.

Read:  Arón Canet is discharged and will compete in the Spanish Grand Prix in Jerez

“In the race it is difficult to overtake in Jerez, and now with the aerodynamics and new devices even more so. Normally, in the race, when you already have a good position, that’s where you stay”, he valued in this regard.

On the other hand, regarding the fact that his former teammate and rival Jorge Lorenzo became part of the ‘MotoGP Legends’ this weekend, he was reminded of him as one of the “strongest” riders, with a marked personality.

“When he was sweet he was unbeatable and he drove in an incredible way. I have a lot of respect for him, I learned a lot of things fighting against him. When he was my partner, he was already in another environment and with another mentality. But rankings cannot be made,” he said. , in reference to whether Lorenzo would be one of the best drivers in history.