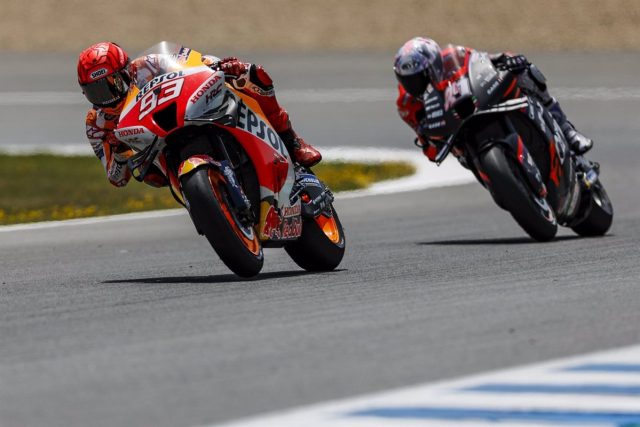 The Spanish MotoGP rider Marc Márquez (Repsol Honda) was “happy” although aware of the need to continue improving after finishing fourth this Sunday at the Spanish Grand Prix, where the “Jerez fans” helped him in a race of “survival”.

“We had a good race, I think the fans enjoyed it. We fought until the end and this is what I’ll keep. Today was the best I could hope for. I had to make a good start and it wasn’t, We almost collided with Aleix and Miller. The race has been one of survival and saving strength,” he said in statements provided by his team.

Read:  Chantra and Foggia, best times in the first day of private Moto2 and Moto3 tests in Jerez

The one from Cervera achieved his best position this season and confessed that he had to push, also driven by the fans. “I launched the attack to stop Aleix, because I knew he had a little more pace. I had that save in which I almost fell, but I think the Jerez fans picked me up to finish fourth”, he pointed out.

“”We have saved the weekend based on strategy and tactics, but we have to look for one more point of speed. I’m happy, but we want to keep evolving,” he finished.