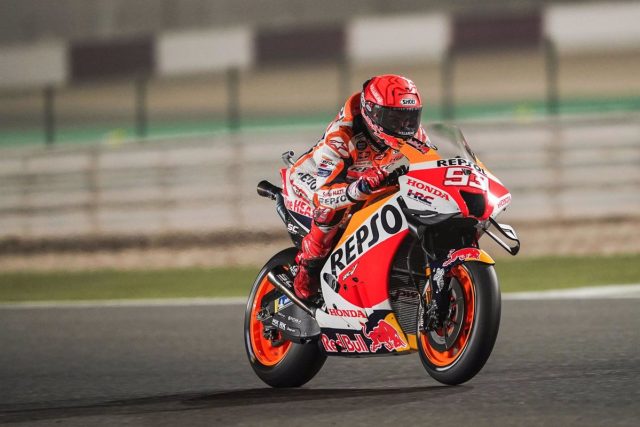 The Spanish rider Marc Márquez (Repsol Honda) set the fastest time this Friday in free practice in the MotoGP category of the Portuguese Grand Prix, the fifth round of the Motorcycle World Championship, while the Indonesian Mario Aji (Honda) and the German Marcel Schrotter (Kalex) were the fastest in Moto3 and Moto2, respectively, on a day that was wet and windy.

As planned, the weather was the protagonist of the first contact with the Algarve International Circuit, although rain is also expected for this Saturday’s qualifying session, but not for the race, which indicates that it will be dry.

At the moment, with the wet track, in the ‘queen’ category the best was Marc Márquez, who earned his best time in the first round, where he was the only one capable of lowering the 1:51 barrier in the whole day. The eight-time world champion set a best time of 1:50.666.

The rider from Cervera was just 41 thousandths ahead of his teammate, Pol Espargaró, who was the only one, along with the Yamahas of Andrea Dovizioso and Franco Morbidelle, to improve his times in the second round. The ‘Top 5’ in the combined table was completed by the Spanish Joan Mir (Suzuki), the Italian Marco Bezzecchi (Ducati) and the Frenchman Johan Zarco (Ducati).

On the other hand, in the Moto3 category, where many crashes were recorded, the best time on Friday was for the Indonesian Mario Aji (Honda), with a best lap of 2:02.491, 53 thousandths better than the Brazilian Diogo Moreira (KTM). ) and 75 better than the Italian Riccardo Rossi (Honda).

Read:  Jorge Martín: "The 2022 World Cup is going to be one of the most even in history"

Carlos Tatay (CFMoto), fourth one tenth, was the best Spaniard, while Sergio García Dols (GasGas), second in the World Championship, was fourteenth, almost one second off the best time, although almost one second faster than the Italian Dennis Foggia (Honda), championship leader.

Finally, in Moto2, the best times came in the second session, dominated by the German Marcel Schrotter (Kalex) with a time of 2:00.678, the only one capable of going under 2:00 and who was half a second ahead of the British Jake Dixon (Kalex) and seven tenths to the American Camero Beauvier (Kalex). The best Spaniard was Augusto Fernández (Kalex), sixth at almost eight tenths, while Arón Canet (Kalex) was eighth, at 1.3 seconds.