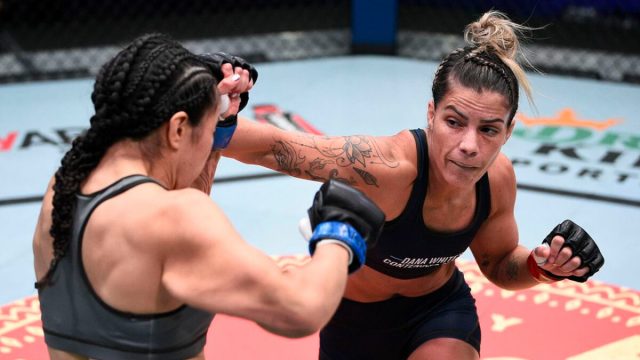 On Wednesday, crypto-currency payment services company Bitwage announced that Luana Pinheiro will be the first UFC fighter to be paid in bitcoins. Pinheiro’s boyfriend, a UFC flyweight fighter, started getting paid in bitcoin back in March and after her eight-fight winning streak, Luana Pinheiro decided to follow her partner’s decision to get paid in crypto.

UFC featherweight Luana Pinheiro is going to get paid in bitcoins via Bitwage.

Ultimate Fighting Championship (UFC) fighters are getting into crypto-currencies, after UFC heavyweight champion Francis Ngannou announced that he will receive half of his UFC 270 purse in bitcoins. The UFC has also partnered with digital currency exchange Crypto.com and UFC Fight Night bonuses are paid in bitcoin. On July 27 Bitwage announced that UFC fighter Luana Pinheiro will be the first UFC fighter to be paid in bitcoins.

Luana Pinheiro got the idea from her boyfriend, who is also a UFC flyweight fighter, Matheus Nicolau. Nicolau started getting paid in BTC in March and Bitwage says that makes them “a real UFC power couple on the bitcoin standard“.

“MMA is a brutal sport and there is no time for overthinking. Mental strength and the appeal of one’s mind are everything“, Pinheiro explained in a statement. “I don’t think I would have a problem with bitcoin going down or up. If it wasn’t volatile, it wouldn’t go up either. Think about it: it takes an average of 10 to 15 years for someone to get a Brazilian Jiu Jitsu black belt, so my time preference is just as long, if not longer. I call this the black belt time preference. Everything else is just noise to me and the lower the price, the more bitcoins I can secure for the future.“

Jonathan Chester, co-founder of Bitwage: ‘The right information at the right time is critical’

According to Bitwage co-founder and CEO Jonathan Chester, the company’s team traveled to Rio de Janeiro, Brazil, to help Pinheiro get started. Chester noted that the service is not just for athletes and high net worth individuals, as anyone in the world can choose to use Bitwage’s crypto payment services. “The right information at the right time is everything. Having knowledge and not acting on it is not why we acquire knowledge in the first place. We get it in order to act“. Chester explained Wednesday at the announcement. Chester added:

Our goal is to help each individual in their journey. Through education, each individual can choose how they want to be paid, whether it’s from their own wallet or their bank account. So, at the end of the day, he doesn’t need anyone and is truly independent.

Since 2014, Bitwage has offered payroll services in crypto and stablecoin, and in 2020 launched a retirement service with the Gemini exchange. To date, the startup has processed more than $150 million in transactions and has 50,000 users and partnerships with 2,000 companies worldwide. In addition to UFC fighters Pinheiro and his boyfriend Nicolau, professional athletes Alex Barrett, Achara Ifunanyachi and Alex Crognale have also chosen to get paid in crypto using the Bitwage service.