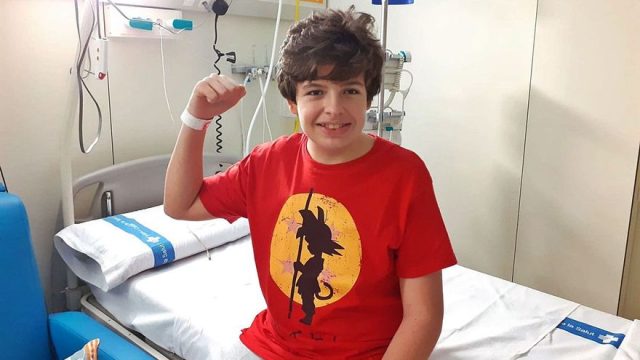 Some parents from Maçanet de la Selva (La Selva, Girona) are looking for a bone marrow donor compatible with her 13-year-old son, because the family have already been tested and they are not. Marc Veguillas Béjar has been admitted to the Vall d’Hebron Hospital in Barcelona since September 3, 2021, after he was diagnosed with severe bone marrow aplasia. This sickness affects the production of platelets and white and red blood cells -which in his case is almost zero- and the body is left unprotected. “Any wound could be harmful because he has no defenses,” explains his mother, Natàlia Béjar.

After undergoing the tests and being told that they were incompatible, the Veguillas Béjar family has launched an appeal for the people go donate marrow and try to find one for Marc. “If we don’t find one for our son, we’ll find one for another,” says Béjar. And he adds: “Until you’re here in the hospital, you don’t find out how many minors there are waiting for a bone marrow transplant.” In Maçanet, a group of relatives and friends are making banners to support them and encourage neighbors to become donors. Also the mayor, Natàlia Figueras, is echoing to launch a campaign.

Every year 6,400 people are diagnosed with leukemia in Spain and only 1 in 4 have compatible family members. The rest need an altruistic donation. The good news is that actual bone marrow donations in the state have increased sevenfold in the last ten years and this is mainly due to the increase in donors.

How to become a donor

Become bone marrow donor it is relatively simple. First you have to sign up for the Bone Marrow Donor Registry (REDMO) of the Josep Carreras Foundation. You must be between 18 and 40 years old and have a blood draw. Once this step has been completed, the donor becomes part of the REDMO, where he or she appears until the age of 60. This registry, which is updated every Monday, can be consulted throughout the world to find a compatible bone marrow for the patient. If it is found, the person is summoned to do the bone marrow extraction. The donor will regenerate the marrow completely, it can give several times and it is not dangerous.

Marc’s illness was detected a few months ago by some bruises that the teenager had all over his body. The mother explains that at first they did not give it importance, because he played as a soccer goalkeeper and was constantly hit by the ball. Realizing she had them on her skin for months, they went in for tests.

The first review was done at the Hospital de Santa Caterina in Girona. “There they informed us that the diagnosis was between three options: leukemia, marrow aplasia or a viral picture in the marrow”. And they were referred to the Vall d’Hebron Hospital. “We took a weight off our shoulders when they told us it wasn’t leukemia, but at the same time you don’t know what aplasia is.” Béjar chose not to consult anything on the internet “and listen only to what the doctors tell us.”

Go out from the hospital

Since joining, Marc has not been able to leave the hospital. And you won’t be able to do it if you can’t find one. marrow compatible with yours and the body does not reject it. The luck, says the mother, is that Marc “is physically well.” For now and as a temporary solution, Marc receives weekly platelet and blood cell transfusions at the hospital. “Until you find a donor, you will not be able to lead a normal life.”

“Emotionally, we have a terrible time. But we feel very accompanied here in the hospital.” Apart from the doctor, they have psychological support and there are also teachers who help the boy to follow the school year and complete all the work that is sent to him from his institute.