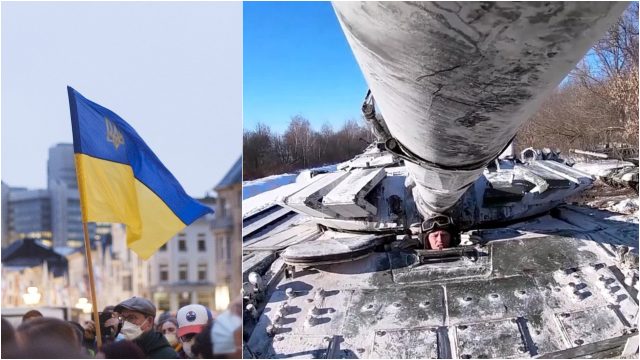 A director from Ukraine told, on a social network, an interesting story about the war in her country. According to Marysi Nikitiuk, villagers in the Sumy region managed to eliminate four Russian tanks using only two flags. The funny story seems unreal, but given Russia’s poor performance in this war, nothing surprises us.

The story is this:

Four tanks entered a village, and soon after stopped because they ran out of fuel. The tankers decided to continue the journey in two tanks, removing the fuel from the other two to double the autonomy of the others. Then they went on, and the villagers went and put two Ukrainian flags on the vehicles left behind by the Russians.

Read also: Why the issue of the MiG-29s refused to Ukraine is a false one. The aircraft wouldn’t have helped much

Subsequently, the tankers returned with fuel to recover the abandoned vehicles. They saw the enemy flags and, believing that they had reached the hands of the Ukrainian fighters, opened fire on them, destroying them.

The remaining tanks went through the village until they reached an old bridge. What the Russians did not know was that he had a weight limit of 5 tons. When a tank landed on him, the bridge collapsed and the crew drowned. The fourth tank, lost, eventually got stuck and was abandoned by the crew. The incident seems to be real. A Facebook user posted, in the comments section of the director’s post, a video clip with the tank in the river and a picture with the jammed one.

The lack of professionalism of many Russian soldiers astonished the world. Soldiers were filmed by a security camera while stealing chickens and eggs from a household, and a soldier was caught trying unsuccessfully to rob an electronics store in Kherson. The incident was called the “Battle of Techno House” on the Internet.

Read also: How the Americans managed to give the Ukrainians secret Stinger systems by removing a few screws