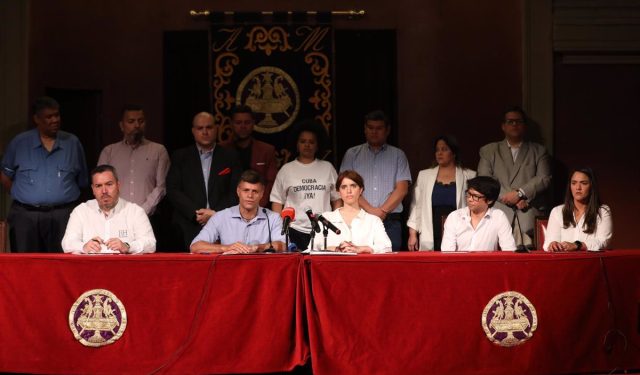 The Venezuelan opponent Leopoldo López assured this Friday that the invasion of Ukraine has made “it clear that the autocracy has no ideology” and has stated that “the struggle of the Ukrainians for their freedom is the struggle for the freedom of Cuba, Venezuela and Nicaragua”.

In an event held at the Ateneo de Madrid and in which the Cuban opponents Yúnior García and Carolina Barrero participated, as well as the Nicaraguan Santiago Urbina, López stressed that the war in Ukraine “makes there no doubt that the first global geopolitical conflict is autocracy confronted with democracy as a model, with freedom as an aspiration”. “It is clear what is the importance of these countries, especially Russia, in Latin America,” he asserted.

For him, the case of Venezuela is more than evident: “there is a relationship that has been going on for more than a decade in the military, intelligence, economic, energy, diplomatic and also organized crime fields.” “The Putin regime is an enabler of a criminal economy that has developed in Venezuela in recent years,” he denounced.

Thus, he has insisted that “it is very clear that the fate of the war in Ukraine, in some way, is also the fate of the struggle for freedom in Venezuela, Cuba and Nicaragua.”

“The autocracy unites those who come from the extreme right and the extreme left but who have in common to defeat democracy,” he stressed before stating that in Venezuela “there is a dictatorship precisely because of the support it receives from China, Russia, Turkey, Iran, Belarus and Cuba”, a group of countries that he has described as “an axis of autocratic countries that support the dictatorship of Nicolás Maduro”.

SUMMIT OF THE AMERICAS

On the occasion of the Summit of the Americas, to be held from June 6 to 10, opponents have appealed to the countries invited to the meeting and have insisted that “dictatorships must be left aside.”

“We make a clear call to support that the dictators of these countries should not be invited to the summit. It seems very important to us that this position be maintained because we have seen in recent weeks blackmail by OAS countries, which have said that If the dictators were not invited, they would be absent from the summit,” López underlined regarding the recent controversy, especially after the Mexican president, Andrés Manuel López Obrador, insisted on the need to include the entire continent and threatened to boycott the event.

Read:  Mother and daughter seriously injured in Japan after being stabbed by teenager who wanted to be "executed"

Other leaders of the region have joined him, such as the Honduran president, Xiomara Castro, who has pointed out that “if not all the countries are present, it is not a Summit of the Americas, or the Guatemalan president, Alejandro Giammattei, who has insisted on that will not come

López, however, recalled that “the Organization of American States (OAS) signed the Democratic Charter in 2021, a commitment of all countries to all democratic values.” “We expect the clear and defined support of all the countries of the Americas and we support that they are not invited,” he asserted.

Regarding the position of the United States, which will host the summit, he has argued that “its position has been clear.” “They have said that they will not be invited,” he stressed.

López has indicated, on the other hand, that the “easing of sanctions” against the Maduro government can serve as a tool in the framework of the negotiations “if there is a clear commitment on the part of the dictatorship.”

“Sanctions are a means to an end and can be relaxed. If there is no clear, precise, forceful commitment on the part of the dictatorship in the negotiation process that allows for truly free elections, these relaxations will be reversed. There is a opportunity, we understand that it is narrow”, he maintained.

In this sense, he explained that “this relaxation of sanctions has a specific objective of being able to reopen the negotiations and open the way to free, fair and verifiable elections” although he added that he “supports” the position of The United States, which has insisted that “if there is no clear response from the dictatorship, those sanctions will be lifted and more sanctions will follow.”

López took the opportunity to recall that after the war in Ukraine there has been a change in the model regarding sanctions by the international community, especially in Europe, where “it seemed that there was an apprehension about imposing sanctions”. “The forceful and immediate reaction by the EU against Russia for the invasion of Ukraine was more than evident,” she pointed out.

García, for his part, pointed out that Cuba “historically has made use of migratory waves to pressure the United States.” “This migratory wave that we are experiencing now exceeds that of the 1980s and 1990s, not only because of the number of people who have arrived at the southern border of the United States, but because of all those who are on the way,” he has said.

“Right now there is a migration crisis that the Cuban regime is using in two ways: to affect the United States and as a kind of escape valve to ease the pressure inside the country,” he declared.

However, he has expressed that his views on sanctions have changed since he “heard a speech by Nelson Mandela demanding sanctions against the apartheid regime.” “I understood that dictatorships and failed regimes need sanctions. My personal position is that these sanctions should affect the population less and the dictators more,” he warned before acknowledging that “finding that balance is not always easy.”

Likewise, he has largely attributed the lifting of part of the sanctions by Washington to the fact that the migration crisis “directly affects” them. “What worries me with the issue of not sanctioning (…) reflects a certain ingenuity and a lack of knowledge of how dictatorships work, which usually use sanctions as an excuse to justify everything bad that happens internally”, he highlighted. .

Regarding the possibility of launching a joint opposition platform, Urbina has reported that the main objective is to call for joint action. “Everything that we can build together in our countries is always welcome,” he stated.

“The regimes of Cuba, Nicaragua and Venezuela work in coordination, so it is important that those of us who fight for freedom and try to bring about change can do so too,” he said.

“What we are doing in Madrid is being replicated in Miami and San José in Costa Rica, and the objective is for this to continue and go further”, he formulated before López assured that this cooperation “is not something that begins today “. “News will come soon about this strengthening and exchange between those of us who suffer from the most scandalous authoritarian regimes in Latin America,” he has proclaimed.

The parties have in turn made a joint statement in which they have expressed “their willingness to fight and make a common front against authoritarianism.” “If the tyrants are united, that the resistance is also united,” they have underpinned.

“Currently, none of the tyrannies that usurp power complies with the obligations that, as States, they are called upon to guarantee,” says the text, which points to the case of Cuba as “remarkable” for having a “single-party model that does not has allowed no competitive electoral process in decades.