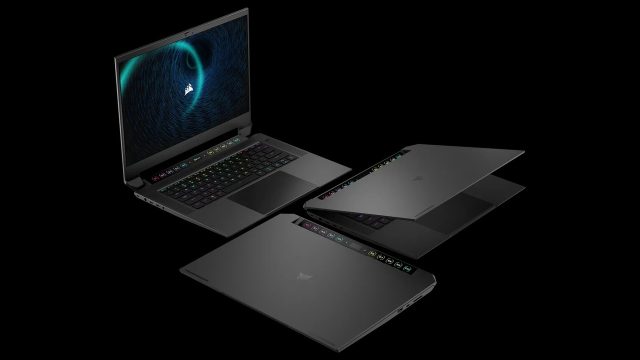 Corsair, a company known mainly for PC components and gaming peripherals, officially enters the gaming laptop market with its own brand. The company previously released pre-configured desktop computers, but also bought the American Origin PC assembler. However, this is the first time it has launched a laptop, the Voyager model being based on AMD components, being officially announced at the Computex conference, where the Ryzen 7000 series was also unveiled.

Corsair Voyager is a gaming laptop with a top configuration, similar to what I saw recently on the ASUS ROG Zephyrus G14. We are talking about a Ryzen 7 6800HS or Ryzen 9 6900HS processor, a Radeon 6800M GPU, up to 64 GB of Corsair Vengeance DDR5 RAM and up to 2 TB of storage on the M.2 SSD. Basically, top configurations for AMD components available right now. What’s interesting about Corsair Voyager is the decision to use a keyboard with low profile Cherry MX mechanical switches, something we rarely see on laptops. Of course, the keyboard is RGB lit, and at the top of the screen there is a 1080p webcam.

The fact that it uses a higher resolution camera than the 720p we are used to seeing is not a coincidence. This laptop is built to be used as a complete and streaming solution. For this, Corsair has integrated 10 programmable touch buttons, which are located above the keyboard. There is also a battery indicator. You can use the Corsair software to make various shortcuts on each button, useful for changing the scene during streaming, to turn the stream or recording on or off, or to turn the microphone on and off. These buttons are also available when the laptop has the screen closed and folded, so that it can be accessed if you use your laptop with an external display, for example.

We don’t have an official price yet, but considering the top configuration, Corsair Voyager will certainly not be cheap. The launch is expected sometime in July.