Which of the big tech companies has cut back the most amidst a global economy in crisis? With the prospect of a recession growing, can we expect more job cuts in 2023? We attempt to answer these questions in the following sections.

The U.S. technology sector has been particularly hard hit by rising interest rates. As an example, the NASDAQ-100 Technology Sector Index (NDXT), which tracks the 100 largest technology stocks, has fallen more than 39% since the beginning of 2022. By comparison, the S&P 500 Index, which is a broader measure of the U.S. economy, has lost about 20 percent over the same period.

Since about mid-2022, many technology companies have resorted to a variety of cost-cutting measures, ranging from travel and real estate reductions to, in the most extreme cases, downsizing.

According to Layoffs.fyi, a project tracking layoffs in the technology sector since the start of the COVID-19 pandemic, 153,110 workers were laid off in 2022. The number of layoffs peaked in November, when 51,489 technology workers lost their jobs.

The November spike corresponds to massive layoffs at Amazon and Meta, with the two tech giants cutting their respective workforces by about 10,000 each.

*Relative change in headcount was calculated using the best available sources. Tesla’s headcount figure goes back to Q4 2021. All data in the table was collected on January 3 and is an approximation.

Let’s take a look at the top 5 tech companies to see how they’ve fared in the souring economy so far.

In response, Meta CEO Mark Zuckerberg announced in November that the company would lay off 11,000 people, or 13% of its entire workforce. According to the New York Times, the company will also freeze hiring until the first quarter of 2023.

Google is expected to lay off 11,000 people and reduce its workforce by 6 percent.

Google is the only major technology company that has avoided laying off employees so far. However, according to recent reports from the Ney York Times, which cites sources inside the company, the search giant is expected to take steps to reduce its workforce in the coming months.

Google employees are concerned that the company’s recently implemented performance review system will accelerate job cuts. According to a report by The Information, about 6 percent of people working for the company could be fired for “lack of impact“. A wave of layoffs at Google in 2023 could see up to 11,000 employees lose their jobs.

Twitter cut its workforce in half: 3,700 employees were laid off following the Musk buyout.

In the wake of Tesla CEO Elon Musk’s takeover, Twitter has been in the news 24 hours a day. One of the reasons was Musk’s controversial decision to cut 50 percent of the company’s workforce, affecting virtually every department from marketing and communications to research and public policy.

According to CNN, Musk said at an investment conference in November that parting with so many Twitter employees was necessary because advertisers are beginning to rethink their spending in light of an impending recession. “Unfortunately, there’s no choice when the company is losing more than $4M/day” tweeted Elon Musk following the wave of layoffs.

Tesla is another of Musk’s companies that has struggled lately. Tesla stock has fallen more than 72% over the past year, becoming one of the worst performing U.S. stocks of 2022. A high-profile multi-billion dollar short position by Microsoft founder Bill Gates certainly didn’t help TSLA’s performance. Investment sentiment remains bearish in the near term.

Read:  Binance's acquisition of FTX.com throws the market into chaos

In June, Musk reportedly asked Tesla executives to “pause all hiring” and cut 10 percent of the workforce, which would amount to about 10,000 people. Reuters reported at the time that Musk said he thought the economy was headed for a recession and that he had a “super bad feeling” about this. According to a recent Electrek report, Tesla will make another round of layoffs in the first quarter of 2023, but the extent is currently unknown.

Retail giant Amazon is also one of the big tech companies that has been cutting employees in recent months. The first round of layoffs began in November and targeted about 10,000 people, or roughly 0.66% of the company’s 1,500,000 employees.

More cuts could be on the way, as Amazon may increase the total number of employees to be laid off to 20,000, sources said. It’s worth noting that Amazon’s workforce had been growing incredibly fast over the previous two years, peaking at 1.62 million in the first quarter of 2022. 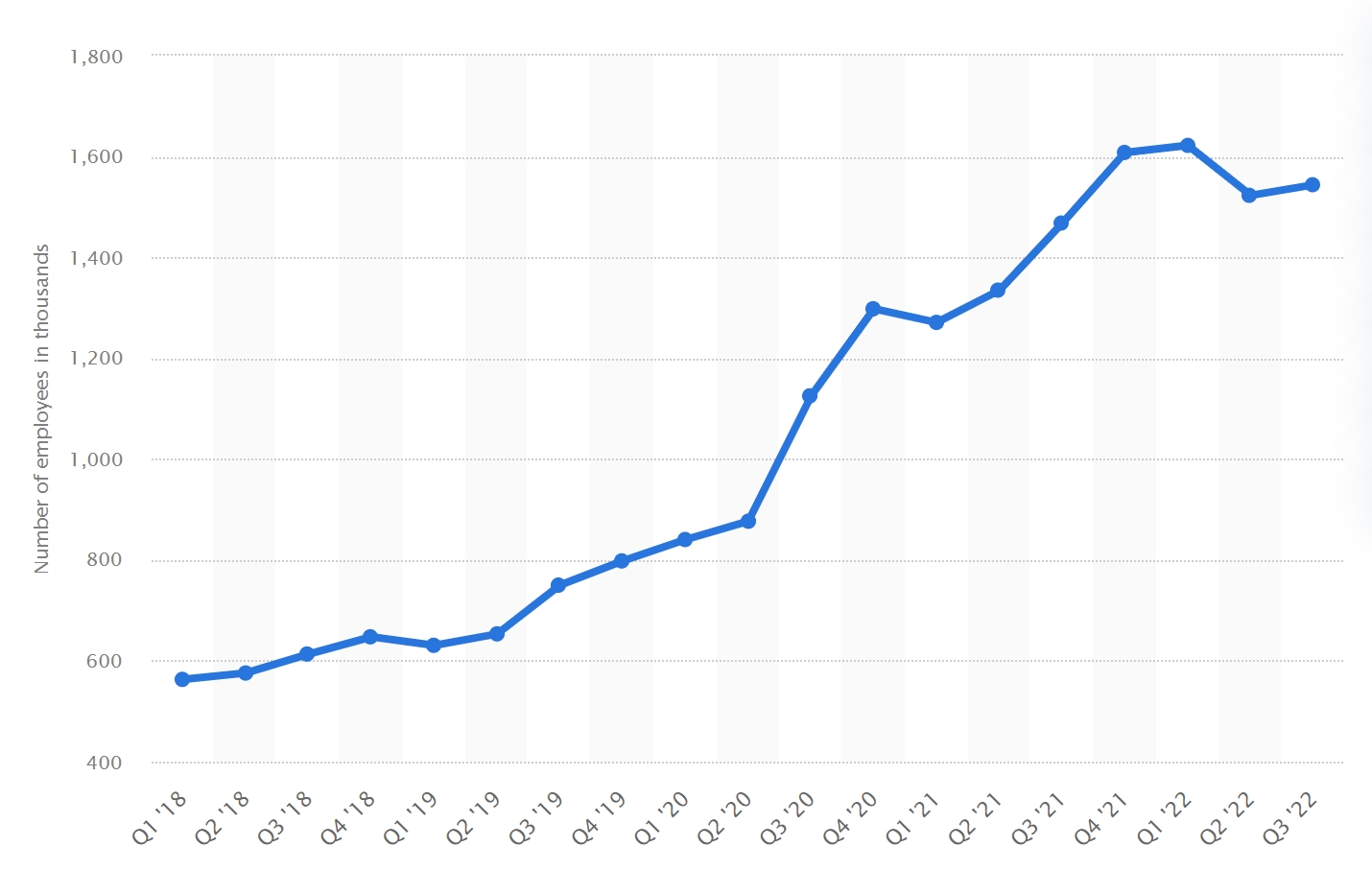 Number of Amazon employees since 2018. Source:

AMZN stock has lost more than half of its value over the past 12 months, while Amazon’s market capitalization has shrunk to “only” $875 billion. In the near term, the outlook for AMZN remains bearish.

Rising inflation, the high cost of credit, and general macroeconomic instability have contributed to a sharp economic downturn. Large technology companies were particularly hard hit, most likely because of their unprecedented growth in previous years.

This trend is closely mirrored in crypto, raising questions about whether crypto is dead, especially among its detractors. Crypto.com, Coinbase, OpenSea and Kraken are just a few of the companies that have followed their traditional counterparts and resorted to downsizing in recent months. However, there are signs that a recovery may be on the horizon.