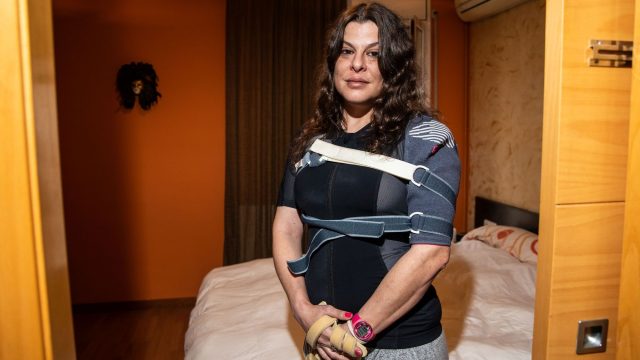 It is one of the diseases classified as rare. permanent pain in the joints, dislocations with movements so simple such as those made to sleep, spontaneous subluxations, fatigue, digestive system malfunction and falls for lack of stability to what to add psychic problems. The ailment is called Ehlers-Danlos and Rebeca Fernández Onsulve, 37 years old and of administrative profession, suffers one of the 13 modalities that exist of this hereditary disorder, the guy hypermobile. There is no cure because the gene that causes it is unknown. Even though he can’t work, the National Institute of Social Security (INSS) denied him disability. First a judge and now the Superior Court of Justice of Catalonia (TSJC) he has been granted absolute permanent disability to perform any job. “It’s an invisible disease because nothing is noticeable,” stresses Rebeca.

“I think it is important to highlight the social aspect of recognizing this disease and a preliminary step for Social Security to take it into account in successive episodes,” says Rebeca’s lawyer, Fernando Martinez Iglesias. It is a minority disease (some 800 Spaniards suffer from it) and, as such, is not understood by all doctors. In Rebeca’s case, she can be an example for other patients. The TSJC has ratified the judgment of first instance that ordered the INSS to pay 100% of its regulatory base, 1,150 euros per month with retroactive effects from 2019.

The judgment of the TSJC it is forceful. He details that Rebeca suffers from joint pain and frequent subluxations in the shoulders, hips and hand, and that she has undergone various operations by cysts, ligaments, trigger fingers, among others. He also suffers from an anxiety disorder with a severe agoraphobia. All of this, according to the judicial resolution to which EL PERIÓDICO has had access, “significantly restricts his initiative and mobility, as well as his personal development, which has been progressively reduced.” He concludes that this situation determines “the existence of substantial limitations for the development of any work activity, no matter how light or sedentary it may be.”

Rebeca receives this newspaper at her house. she wears two splints on the hands that prevent him from having a dislocation. When goes out into the street and puts on one that covers her shoulders, her back and another on her foot. He remembers that when he was 16 years old he had a dislocation in his right arm while swimming at school. He pretended to be strong, but the doctors did not give him the solution. “I put up with everything that was written,” he confesses.

Over time, the dislocations and pain recurred. The doctors were clueless and did not clarify why they occurred. Up to 33 years the disease was not diagnosed. “He was a doctor at the Tres Torres clinic. He told me: you have something strange, ”says the woman. It was he who gave him the triptych of the National Association of Ehlers-Danlos Syndromes and Hypermobility. “His vice president is a second mother to me”, he insists. This entity sheltered him and led him by the hand to the experts.

Rebeca has the ability to position her shoulder properly when it is dislocated. “Do you want us to try it, I’m used to placing it,” said Rebeca. “No, you don’t have to” was her reply. Those dislocations cause him pain. Over the years she has gone through the operating room several times. At least twenty operations. “I have already requested the account,” she specifies. Her visits to Hospital del Mar, Vall de Hebrón and the Clinic. Every month he goes to four or five doctors, from traumatologists, to psychiatrists, neurologists, experts in rare diseases and the pain unit. “I put it on the agenda,” she says.

Read:  The day they tell you: "You have breast cancer"

In 2017, Rebeca was forced to take time off work due to anxiety. She was going to renew her contract at the ETT where she worked as an administrator, but when she came back they didn’t. It was during that period that she was diagnosed with her syndrome and the doctor from Tres Torres recommended that she start processing her incapacity for work. She has 66% disability with reduced mobility and dependency of one degree, she explains. And she lives alone.

“It is difficult for me to do things at home. If I don’t wear the splints I can’t do anything. I can’t take a one and a half liter bottle of water, not grab a broom or a mop”, he says. “It depends on where I don’t go because with a blow my shoulder can be dislocated,” she adds. His refuge is a Whatsapp group with four people who have the same condition. “With them I can talk about the disease because they understand it. They are my escape route. It is difficult for a friend to understand, ”he maintains. In the end, after going to the Vall d’Hebrón hospital so much, Rebeca fell in love with the taxi driver who was taking her.