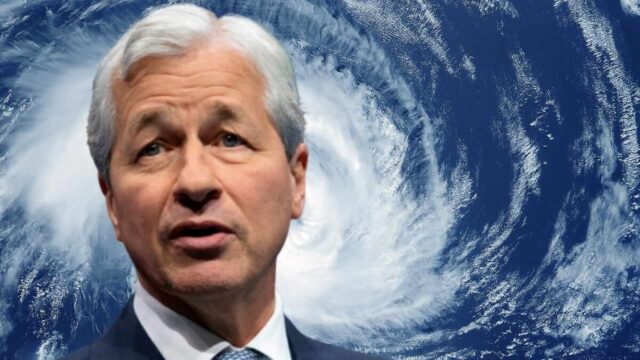 JPMorgan Chase CEO Jamie Dimon says he “should never use the word hurricane” when warning about the U.S. economy. However, he insisted that there are “storm clouds“which”could be a hurricane“.

Jamie Dimon, CEO of JPMorgan, speaks on the U.S. economy.

The chief executive of global investment bank JPMorgan Chase, Jamie Dimon, spoke about the U.S. economy in an interview with Fox Business on Tuesday.

Regarding his earlier warning about an economic hurricane coming that everyone should prepare for, Jamie Dimon said:

I should never use the word hurricane.

He clarified:”What I&rsquor;said was that&rsquor;there were storm clouds that might subside, and people said, ‘Oh, he doesn&rsquor;t think it&rsquor;s a big deal. So I said, ‘No, those storm clouds could be a hurricane.“

Read:  Will DOGE's activated Twitter subscription be a game changer for Elon Musk?

The JPMorgan boss stressed that he is not predicting a specific scenario, adding that what he is warning against could “be nothing” or “could be bad. He stated, “I think we need to understand that I’m not predicting one or the other, I’m just saying, be a little prepared for both.“

Despite the current uncertain economic environment, Dimon remains optimistic about the American consumer. “The consumer is still strong“, he described. “Their balance sheets are in good shape. They are spending 10% more than they were before the crisis. They have more money in their checking accounts from businesses that are in good shape, and that is the engine of a strong economy.“

Regarding the oil crisis, the boss of JPMorgan said: “It has become more acute because of Russia, Ukraine, oil, energy, food, quantitative tightening.“

Is this going to be enough to raise rates to 5%? And that has a huge effect on small countries, poor nations, those that depend on oil and gas imports.

These uncertainties “may very well abate,” leading to a “kind of soft recession in the Goldilocks,” he added. “But they might not be” he also warned. “So I remain cautious on this point“. In October of last year, Jamie Dimon said that a recession could be six months away. In August, he said something worse than a recession could happen.