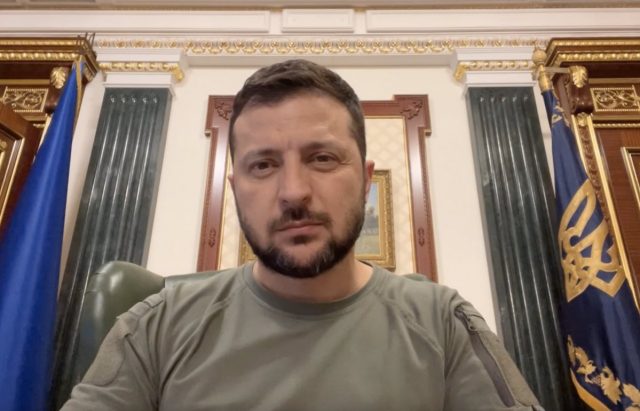 Ukrainian President Volodimir Zelensky said Tuesday that Russia’s war against Ukraine began with the invasion of Crimea and must end with its liberation.

“This Russian war against Ukraine and against the whole free Europe began with Crimea and must end with the liberation of Crimea,” the Ukrainian leader has assured in his daily message to the Ukrainian population.

Zelensky has stressed the importance of the Crimean peninsula for Ukraine and reiterated that the Ukrainian people will never abandon it, despite the fact that Russia has turned it “into one of the most dangerous places in Europe.”

“(Since its annexation,) Russia has brought large-scale repression, environmental problems, economic despair and war to Crimea. Perhaps someday historians will determine how many people have died as a result of Russia’s use of Crimea for terror,” the Ukrainian president has expressed.

All in all, he asserted that the presence of “Russian occupiers” in Crimea “is a threat to all of Europe and to global stability,” arguing that the Black Sea region “cannot be safe as long as Crimea is occupied.”

“There will be no stable and lasting peace in many countries on the shores of the Mediterranean Sea as long as Russia can use our peninsula as its military base,” he has argued.

For this reason, Zelenski has wagered that the Russian war against Ukraine must end with the liberation of the peninsula, although he has confessed that the date for such a milestone to take place is “impossible” to determine.

To this end, Ukraine has launched the Crimean Platform, a “key” diplomatic platform to work for the liberation of Crimea. “The Crimean Platform will be back in operation this year. We are already preparing a summit,” the Ukrainian head of state has detailed.

“The Crimean issue sounds on all international platforms where the Russian war against our state is discussed (…) The world is beginning to recognize that it made a mistake in 2014 when it decided not to respond with full force to Russia’s first aggressive steps,” Zelensky has added.

Later, Ukrainian presidential advisor Mikhail Podoliak has remarked that Donetsk and Crimea are occupied territories and therefore can be liberated. “Everything else is fiction and Russian propaganda,” he has written on Twitter, where he has referred to the jokes that were generated on social networks after the accidental explosion at an airfield in Moscow-controlled Crimea.

“‘Mom, you have to throw yourself!’ is the new slogan of Russian thieves who lived in the stolen territories and houses. Legally, Donetsk and Crimea have the same status as Mariupol or Melitopol. These are Ukrainian territories occupied by the Russian Army that can be liberated,” Podoliak said.