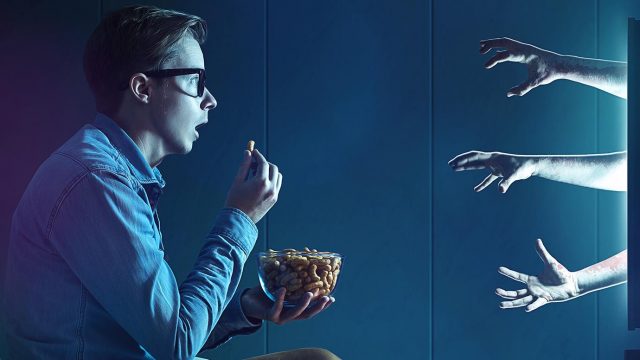 There are a number of movies that, you have to admit, at least on some level, have marked your childhood, adolescence, or even your youth. Many of them may well be horror, since this niche of cinema “has a knack” for stirring up all sorts of feelings of the most intense kind.

But since many of them were made years ago, the chances of you seeing them in cinemas in 2022 are almost nil. Although some of them can be seen on Netflix, HBO Max, Disney+ or other streaming service, not all titles are in those databases.

So here are some of the movies you might want to revisit. You can do that for free and absolutely legally, as you’ll see below.

The Dark and the Wicked

Two adult brothers return to their rural birthplace to care for their ailing father. The Dark and the Wickedf is a deeply disturbing film about generational horror. Both brother and sister are upset that they have to abandon their lives to fulfill their family obligations, and this fuels their anxiety over their mother’s strange behavior towards their father. Is he ill or possessed by a demon? Director Bryan Bertino builds an atmosphere of gripping terror as the family’s situation becomes increasingly complicated, leading to a grim and sad ending.

The Dark and the Wicked is streaming for free on Hoopla.

John Carpenter sparked the slasher movie boom with this simple, minimalist tale of a mute, masked, giant brute hunting babysitters in a seemingly idyllic suburb. Michael Myers escapes from a sanitarium and returns to his hometown of Haddonfield, Illinois, where, as a child, he murdered his teenage sister. Wearing a dark jumpsuit and a white mask modeled after Captain James T. Kirk from Star Trek: Original Series, Michael targets teenager Laurie Strode (Jamie Lee Curtis) and her friends.

Halloween airs for free, with commercials, on Redbox.

Clive Barker made his directorial debut adapting his own book, The Hellbound Heart, a twisted tale of sadism, sex, cenobites and pleasure-seeking demons conjured by solving a mysterious puzzle. The cenobite known as Pinhead (played by Doug Bradley) is an interesting character, but Hellraiser is more about the demented dynamic between two lovers, one of whom is a resurrected corpse. Barker brings his strange story to life, exploring the blurred line between pain and pleasure and creating some horror imagery that sticks in your brain.

Hellraiser airs for free, with commercials, on Tubi and also on Hoopla.

Let the Right One In

The chill of Swedish winter seeps into every scene of this unsettling vampire tale. A shy 12-year-old boy makes a new friend in the apartment complex where he lives: specifically, he meets a bizarre girl who only goes out at night. She lives with an older male friend and appears to be ill, but the boy soon discovers that she is more dangerous than fragile. This is a story about friendship between strangers, but also about revenge.

Let the Right One In is streaming for free on Hoopla and Kanopy.

Copying a bit John Carpenter’s The Thing, as well as Alien, this sci-fi horror film tells the story of a crew of fishermen and a scientist. They become stranded at sea, only to be attacked by a mysterious creature. The monster destroys the boat’s engine and sends tiny spores into the water tank, turning each crew member into a potential host. Hermione Corfield plays the scientist struggling to find a way out.

Sea Fever is streamed for free on Hoopla and Kanopy.

David Cronenberg began his career as a master of horror with this low-budget 1975 film. The film tells the story of an insidious parasite that spreads through a luxury apartment building. The parasite causes those infected to become obsessed with both sex and violence, and then seeks out other hosts to infect. Cronenberg combines visceral revulsion with cutting social commentary, portraying the wealthy as depraved and decadent hedonists “haunted” by the parasites.

Shivers is broadcast free, with commercials, and Tubi.

Film by M. Night Shyamalan will always remain a classic supernatural thriller, and not just for the twist ending. Shyamalan makes sure the denouement has emotional resonance, which makes the film a masterpiece. Bruce Willis plays the role of a lifetime, playing psychologist Malcolm Crowe, who takes on the case of troubled little boy Cole Sear (Haley Joel Osment). Cole can “see dead people” and is haunted by apparitions he can’t escape. It’s a scary, disturbing story, but it can also be seen as one about redemption and forgiveness.

The Sixth Sense airs for free, with commercials, on Tubi.

No matter how many other films have been made since, nothing even comes close to Tobe Hooper’s terrifying 1974 film. The low-budget film is peppered with subtle insinuations about the Vietnam War, with an emphasis on soldier unrest, though it’s less obvious. Some young men get lost in rural Texas, only to be kidnapped and terrorized by a family of cannibals. No doubt Leatherface, i.e. the famous chainsaw wielder, has become a cult horror character over time.

The Texas Chain Saw Massacre airs for free, with commercials, on Freevee and Tubi.

A commuter train traveling from Seoul to Busan turns into a death trap for passengers in this Korean film… with zombies. As a businessman travels with his daughter to visit his mother, he ends up among the undead instead of his intended destination. The train passengers have nowhere to run, as the “plague” quickly spreads among them as well, due to an infected woman who boards the train at the last minute.