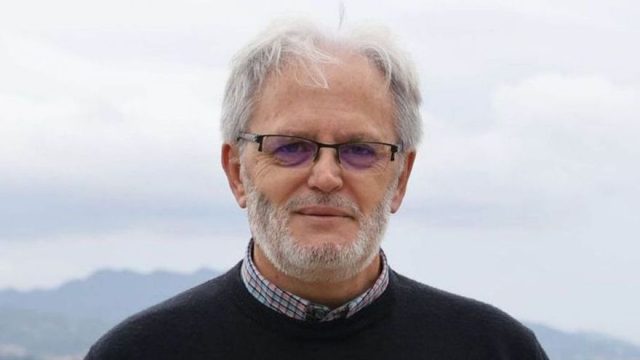 A movie life. Few biographical stories are as surprising, intense and fast as the one experienced by the writer Manel Monteagudo, who this afternoon presents his new book, ‘De mariño a poeta’ at the O Sanatorio (Pontevedra) coworking space. That the journalist exaggerates? Come and read:

(Ssmile) They already told you something.

To start at the beginning: What was your childhood like?

It was very sad really sad because we were very poor. Well, he had divided it into two parts: at the beginning it was very good because I had an extraordinary grandmother, she was an impressive person who crossed my life, or I crossed hers in the best way. I adored her, so much so that when she died my mother said “well, I lost a mother but I gained a son”. Because I didn’t love my mother, I loved my grandmother. And when she wasn’t there we were very hungry, we lacked everything, my parents had nothing. We lived in a house in Noia where the floor was dirtthe wood in the rooms was all moth-eaten…

“When my grandmother was not there we were very hungry, we lacked everything, my parents had nothing”

As soon as I left school, yes, at 14 years old. I had to work. I boarded a ship in Las Palmas de Gran Canaria and went to South Africa. He was really very young, he was also very thin because we had been very hungry and he was very skinny, very pale. And so I went to Las Palmas. Never in my life had I seen a plane up close.. And when I got to the boat everyone stared, I was going to perform the job of oiler, and the one before me was 32 years old. When I was 17 years old I went to Hamburg, in Germany, where I embarked until I went to military service. But even before, when I started to have a good salary, I had started to study naval electricity and electronics. When I got out of the military service I already embarked as an electrical officer and, by the way, I had a recognition from the German authorities in 1978, because I was the youngest officer in all of Germany.

And this is where the accident happened.

On the ship it was great, but We went with a shipment to Iraq and I had a very serious accident: I fell into the hold of the ship from a height of 6 meters. And I can tell you until then, because from that moment I was in a coma for 35 years, until I woke up again.

Read:  Acute childhood hepatitis: what is behind the increase in cases?

“We went with a shipment to Iraq and I had a very serious accident: I fell into the hold of the ship from a height of 6 meters. And I can tell you about that, because from that moment I was in a coma for 35 years, until I woke up again “

From the coma, I imagine, he won’t remember anything.Nothing at all. I only remember one thing: that he had to fix a part, a projector, and the ladder he was on had rubber feet, it was covered, I don’t know how he escaped that way. As soon as I reached out to grab the projector and pushed myself up the ladder, I went. At that moment I noticed how it fell, I thought “allá vou”. And nothing else, she’s done.

Where did you wake up and what was that moment like?

I woke up in a room I didn’t know, here where I still live. I didn’t recognize anything, I was very surprised, I didn’t understand anything. Suddenly a lady comes, with gray hair, I didn’t know who she was. And she lay on top of me crying. At that time she didn’t know who she was, she didn’t know her, until I saw her face. As soon as I saw her I recognized my girlfriendBecause she was my girlfriend at the time. I thought that could not be. She started talking to me, talking to me, I didn’t understand anything she was saying until she picked up a mirror that she had bought on purpose. Does she know what I saw?

Fear gives me the answer.

A man full of gray hair, because I have totally white hair and a white beard. And I just told him “non, non. This is not eu. This is a hair. I am not this, I am 22 years old. I am 22 years old, 22, this could not be eu. How will this hair be? And she explained things to me, little by little she explained things to me. It was very dramatic, I have to say that awakening was very dramatic for me. And when about 15 minutes had passed, a girl came in and my girlfriend told her “come in, Sara, come in”. I didn’t know who she was either, but she threw herself on top of me saying exactly “dad, daddy… Dad, meu daddy”. Then they told me that she was my daughter. My wife explained to me that we had two girls, and I became more and more surprised and disconcerted. And even worse when my second daughter showed up, which turns out she was pregnant, so much so that my granddaughter was born 6 days after I woke up, which was October 15, 2014.

Read:  More than 75% of food advertised on TV is unhealthy

I can imagine your bewilderment.

How was your life afterwards?I had to learn to walk, to read, to speak well, although not completely well because in the hospital in Iraq with a tube they damaged my vocal cords. This is not my previous voice. I also had to learn to write.

“I just want to live. I lost many years, but that time has passed and life is forward. I have nothing to do with going back, nothing, because I have nothing left behind”

And he has hurried, because he is already on the third book.

Really It’s the fourth because I also did a self-published one for my daughter who, by the way, was so well received that we made 300 more copies.

Did your girlfriend take care of you these 35 years?

Yes because she always had the confidence that I was going to wake up, despite the fact that the doctors told her that she would not, that I would never wake up and that I thought, that I was clear, that one day she would wake up and I would already be cold, that my only way was the cemetery. It was my wife who took care of me because she is also a nurse, she was the one who took care of me all this time.

You are a very loved one. There is a lot of love in your life.

Yes, I have a lot of love because for me a person has to be humble in every way, and also have integrity. A person has to be complete and have great dignity and humility, and I think I’ve always had it. I carry it in my veins, inside, I was born with it. And, as I told you, my grandmother gave me all the love in the world, so I’m affectionate, sometimes even romantic (smile); I’m like this.

What do you want today?

I just want to live. What I have left of life what I want is to live. That is what I want, to live life, because I lost many years, but that time has passed and life is moving forward. I have nothing to do with the back, nothing, because I have nothing left behind, except for two wonderful daughters, two grandchildren, and my wife, who is a monument to respect and patience. I will never be able to repay her for what she did for me, it cannot be put into words.